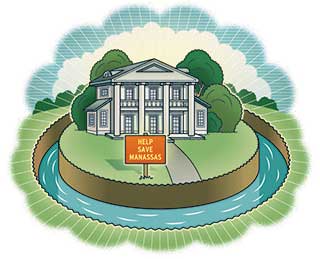 In the November/December issue of Mother Jones, I wrote of how Virginia political blogger Greg Letiecq and Help Save Manassas, a grassroots anti-immigration organization he founded to combat the presence of “illegals” in Virginia’s Prince William County, had helped to draft a series of nativist measures targeting the growing multitudes of illegal day laborers that have followed in the wake of the region’s building boom. Having passed a vague motion last July to curtail “public benefits” to illegal immigrants, the county’s Republican-led Board of Supervisors waited until October to detail the services that would be denied: substance-abuse counseling, homeless assistance, and elderly care programs. The proposed measures also provided local police with expanded powers to check immigration status during traffic stops.

But now that it’s time for the county to put its money where its mouth is, problems are beginning to surface. A new report by the Board of Supervisors’ staff has found that implementing the anti-immigration measures may be more expensive than simply allowing things to continue as they are. For one, state rules may prohibit the county from denying certain public services. For another, so few people use the services under consideration that auditing them would only increase their expense.

Few residents use some of those services, the report said, and the county cannot restrict other services because the state won’t allow it. In addition, the report said, the board’s action could inconvenience thousands of legal Prince William residents.

For example, county officials would have to determine the legal status of more than 3,000 elderly and disabled residents who might be eligible for real-estate tax relief, a labor-intensive process. And nearly 13,000 business owners would have to appear in person at county offices to provide proof of legal status in the first year of the anti-immigration program, the report said. The plan is scheduled to start July 1.

It is not clear how much money the county will save by denying some services. But the plan will cost $3.3 million to implement, nearly $2 million of which will go to the police department, about $1 million to the adult detention center and $500,000 towards social services…

According to the report, only six Prince William residents use a program that allows elderly people to remain at home and receive help with light housekeeping and meal preparation. No one knows whether any of the clients are illegal immigrants, because the county does not ask.

So, okay, maybe an audit of the county’s meals-on-wheels program could be done easily, but do local politicians really think they’ll be tackling illegal immigration by denying six seniors their macaroni and cheese?

All of this nonsense is occurring at a time when Prince William County’s budget is $51 million in the hole. The Board of Supervisors will consider two budget proposals next month—one that includes the illegal immigration measures and one that does not. They’ll have to decide what its worth to kick their neighbors to the curb.