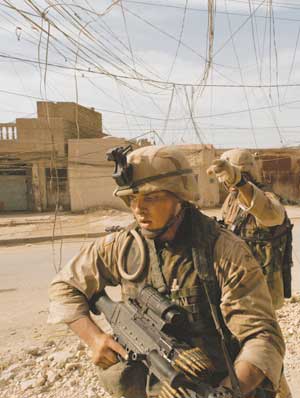 On Monday, Senate Democrats held a “media summit” for reporters, where they outlined their agenda for the coming year. They promoted all their plans for creating economic stimulus, protecting civil liberties, and pushing health care reform. But when it came to the Iraq war, they had nothing new to say. The senators expressed a general commitment to ending the war and called for Iraqis to take more responsibility for their future. But as George W. Bush enters his final year in office, the Democrats appear to have no good ideas on how to confront him on Iraq.

On election night 2006, a triumphant Nancy Pelosi, the Democratic Speaker-to-be, promised a “new direction” in Iraq. And in the months that followed, congressional Democrats, hoping they could force a change in the president’s policy, attempted a variety of legislative maneuvers to do just that, even at one point staging an all-nighter in the Senate in advance of a vote to withdraw troops. All those efforts failed.

The president refused to budge, and congressional Republicans have remained steadfast in their opposition to bills that tied war funding to withdrawal timetables, shortened deployments, or restrained the troops’ mission in Iraq. Using Senate filibusters and once relying on the President’s veto pen, Republicans were able to block Democratic efforts to change course in Iraq.

There are more American troops in Iraq today than when the Democrats assumed the majority in Congress. On Monday, the Pentagon announced that the president will ask Congress next week for another $70 billion to fund the war through his last day in office. And the administration has signaled that it may seek to enter a long-term security agreement with Iraq, which could lay the groundwork for a military commitment that extends beyond the Bush presidency. Also on Monday, Bush issued a presidential “signing statement” indicating that the White House may ignore provisions included in a recently passed defense authorization bill, among them a measure prohibiting permanent American bases in Iraq.

In July, Lee Hamilton, the former Democratic congressman and co-chair of the Iraq Study Group, predicted that “the Democrats are not going to stop the war.” It’s becoming increasingly clear that he was right. The Associated Press reported on Monday that Democrats are reluctant to begin debate on the $70 billion spending bill because they don’t have the votes to bring the troops home. To stop the war, the Democrats could filibuster funding for the troops. But a majority of congressional Democrats have balked at resorting to this “nuclear option.”

Without a legislative exit strategy, Democratic leaders in Congress still insist that Iraq remains a priority. Jim Manley, a spokesman for Senate Majority Leader Harry Reid, says, “both the Speaker and Senator Reid are committed to try to force a change in policy.” But he concedes that congressional leaders remain “a bit surprised that the Republicans, especially in the Senate, stuck to the President this far.” It is possible that vulnerable Republicans who are up for reelection this November will change their positions on the war. But as American casualties in Iraq have fallen in recent months, Republican pro-war rhetoric has grown more strident, not less so.

Rep. Lynn Woolsey (D-Calif.), co-chair of the Congressional Progressive Caucus and a leading anti-war Democrat, said this week that despite the obvious political obstacles, the Democrats should not cease efforts to end the war. “Of course, we have to have a Democratic president if we want the troops home at all,” she said. “But we cannot stop the [antiwar] drumbeat because that would be irresponsible. . .We have a responsibility, and that is to talk about this, and remind people that it’s going on. They’ve got to know that members of Congress ‘get it’ and care.”

Ninety-four members of Congress have signed a letter Woolsey circulated promising not to vote to fund any war measure that does not bring the troops home. And Woolsey herself has new legislation planned for February that will, she says, “bring our troops home in orderly fashion within a year.” The bill, like others the Democrats have advanced during the past year, seems doomed, but Woolsey is unfazed. “It’s on my watch,” she said. “And there’s nothing in me resigned that this is OK and I can wait a year before any more is done about it.”

Even some antiwar activists now seem to accept that withdrawing from Iraq is a non-starter in Congress—at least until there is a Democratic president. Judith LeBlanc, the national organizing coordinator for United for Peace and Justice, an umbrella group for antiwar organizations, says that the movement’s high hopes at the beginning of 2007 have led to a letdown. While she praised the Democrats’ efforts, LeBlanc said that “the political reality is that the pro-war side maintained a lot of political momentum and political control. The slim margin in the Senate effectively blocked any attempts to end the war.” Currently, she says, her organization and its member groups are planning anti-war rallies to pressure Congress in the coming year. But, she acknowledges, it is “unlikely” large numbers of troops will depart Iraq before the close of the Bush presidency. “It’s unfortunate, and many more U.S. troops and Iraqi people will die,” she said.