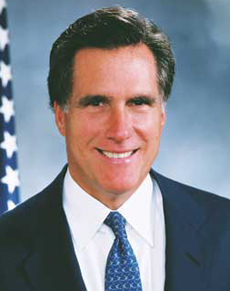 In a tense exchange with an AP reporter on Thursday, Mitt Romney insisted that even though a registered lobbyist is one of his senior advisers, lobbyists do not “run” his campaign.

The claim is part of Romney’s new self-styled outsider message: lobbyists are part of a broken Washington system and Romney has nothing to do with them.

The truth is that Romney is tied closely with many lobbyists. The AP reporter Romney exchanged sharp words with later reported that several Romney aides and advisers are lobbyists. Additionally, as the Nation first reported, Romney has accepted the second most money from lobbyists of any Republican presidential candidate, and has received the most endorsements from lobbyists.

The lobbyists who have endorsed Romney have represented, in 2007 alone, nearly every part of the health care and financial services industries, the NRA, members of the tobacco industry, and gambling interests.

In fact, nearly every lobbyist who has endorsed Romney is peddling influence for the health care industry. They represent insurance companies like AIG and New York Life; trade groups like the Health Industry Group Purchasing Association and the Healthcare Leadership Council (which reps “chief executives from all disciplines within the health care system”); pharmaceutical companies like GlaxoSmithKline and Pfizer; and other extensions of the American health care apparatus like the California Association of Physicians Groups, the Council of Insurance Agents and Brokers, the American Dental Association, and the Biotechnology Industry Association.

Romney’s lobbyists also represent Citigroup, Goldman Sachs, Deloitte & Touche, and most of the major accounting firms. Several of them work for Fannie Mae and Freddie Mac. At least one works for the NRA. Collectively, they represent huge swaths of the energy industry, including big players like the American Petroleum Institute and Chevron Texaco.

The Washington publication Roll Call has listed the lobbyists who are endorsing Romney (there are currently 24). As a public service and a reminder to Governor Romney, we used the Senate lobbying registry to pull out some of the clients they work for. This is a partial list, and is limited to 2007 clients only.

[Ed. Note: This blog post originally said that Mitt Romney has received the most money from lobbyists. It has been corrected.]