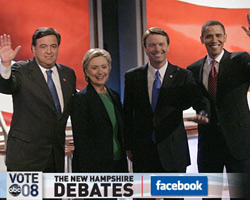 At the Democratic debate on Saturday night in New Hampshire, John Edwards came to the rescue of Barack Obama. Not that Obama needed it. But it provided Edwards the opportunity to (a) whack Hillary Clinton and (b) grab for the change wave that propelled Obama to victory in Iowa. In a debate featuring few true policy disputes, the thrusts and parries defined the final Democratic face-off before the first primary election—and they revealed the Clinton campaign’s strategy for taking Obama down.

Edwards’ moment came when Clinton—in a much-anticipated move—went after Obama. She accused her Senate colleague of flip-flopping on health care. First, she said, he was for single-payer health care; then he proposed a different sort of health care reform. “I think that what we’re looking for is a president we can count on,” she added.

As far as punches go, this was no knockout blow. Clinton’s previous attempt to pick a fight with Obama over the differences in their health care plans—a distinction too wonkish for most voters to worry about—did not succeed. But she was giving it another shot, hoping to depict the winner of Iowa as just another pol. Obama gently defended himself, explaining that he had once said that his preference would be a single-payer system but that he believed it would not be practical to scrap the existing system to make way for such a plan. And he noted, again gently, that he did disagree with Clinton and Edwards on the need for mandating health care coverage. He went on to point out, gently once more, that he and Edwards both have taken a stand on Social Security—advocating a small increase in payroll taxes—which Clinton has declined to do. The two bickered some more, with Clinton claiming Obama had waffled on the Patriot Act and Iraq war funding.

Then John Edwards swooped in. “Any time you speak out powerfully for change, the forces of status quo attack,” he said. He was equating Clinton with those forces. She glowered at him. Edwards continued:

Me and Obama versus the First Lady of the Status Quo—that was Edwards’ message. It was a rather effective push-back against Clinton’s offensive against Obama. Edwards was clearly choosing sides. And he was happy to do the dirty work—which allowed Obama to remain above the fray.

Clinton wasn’t done with Obama. She moved on to another line of attack, basically saying that Obama was more talk than action. She noted that she had repeatedly delivered on change, helping to create the children’s health insurance program and obtaining access to health care for National Guard members.

Clinton was signaling—not too subtly—that in the few days before the New Hampshire election she was going to try to make Obama look like just another do-nothing, back-flipping politician. But by the end of the debate, she had not done the front-runner much damage. All of the candidates—including former New Mexico Governor Bill Richardson—were performing well, discussing various policy notions with specificity and passion. And the ammunition she deployed was not all that potent. (Moving from pro-choice to pro-life—now that’s a flip-flop. Changing your mind about single-payer isn’t quite the same.) “The Clintons really don’t have anything on Obama,” one reporter said to me in the middle of the debate. And he was right. For anyone trying to score the debate, it was probably a draw. And if Obama does have momentum out of Iowa, that would be bad news for Clinton.

But after the debate, in the so-called “spin room,” the Clintonites demonstrated that they intended to keep pounding on Obama on these two fronts: flip-flopping and more-talk-than-action. Phil Singer, a spokesman for the campaign, told reporters that Obama couldn’t cite any specific accomplishments to back up his claim to be an agent of change. (Actually, Obama had mentioned his work to pass legislation on ethics and loose nukes.) “He’s taken multiple positions on health care,” Singer exclaimed. I asked Singer if the same could be said of Clinton. After all, the health care plan she proposed during this campaign was quite different from the Hillarycare proposal she unveiled in 1994. Is she, too, a flip-flopper? Singer, a good spinner, didn’t lose a beat. Nearly fifteen years had gone by between Hillarycare and her latest plan, he replied, and she had learned from her previous experience. But, he went on, Obama had shifted his position over the course of three years. Singer added that the Clinton campaign had a website listing Obama’s policy reversals.

Why are you bringing all this up now? one journalist inquired, suggesting the campaign was acting out of desperation. (Duh!) Singer shot back, “I would ask why the media has not bought it up….Perhaps tonight will be a first step to getting people to have a better sense of [Obama’s] record.” So Clinton was merely goosing along this process of public education.

A few yards away, Doug Hattaway, a veteran Democratic consultant who joined the Clinton campaign five days earlier, told me that Clinton was only now getting the chance to make her case. Could her campaign, I ask, really beat back Obama, who has inspired so many Democrats, with the claim he’s a disingenuous flip-flopper? “The bigger thing that breaks through,” Hattaway said, “is the difference between talk and action.” People like to be inspired. But they want to know they have a president that can deliver.”

There’s not much the Clinton crew is hiding. They have two anti-Obama memes. They will see if they can get either to stick to the Democratic dreamboat. David Axlerod, Obama’s chief strategist, not surprisingly, voiced no concern. (In the spin room, no one is ever worried.) “This is the Washington playbook,” he said. “A campaign gets in trouble and they go negative. The question is, is that what the American people are looking for?” No, the question is, what are New Hampshire voters looking for—and will they respond to the Clinton effort to rebrand Obama? Iowa showed that Clinton could not prevail on the strength of her own message. New Hampshire will indicate if Clinton can win by other means.

Whack-a-Mitt: The Republicans Debate in NH

Before you feel sorry for Mitt Romney for getting picked on relentlessly in tonight’s Republican debate at St. Anselm College in New Hampshire, consider the fact that he’s devoted millions of dollars to picking on everyone else.

There was no question who the collected cast of Republican candidates wanted to put between the crosshairs. Time and again, the former Massachusetts Governor was the target of full-scale grenade attacks and small potshots.

They frequently used his words against him. On the topic of the Iraq War, Governor Mike Huckabee looked straight at Romney, who has sniped Huckabee for abandoning the President, and said, “Governor Romney, you yourself on ’60 Minutes’ said that we had left Iraq in a mess. You’ve also said that you weren’t going to have this ‘my way or no way’ philosophy… I supported the president in the war before you did. I supported the surge when you didn’t.”

On immigration, John McCain defended his position from his critics on the right, including Romney, by saying, “Now, no better authority than Governor Romney believed that it’s not amnesty because two years ago, he was asked, and he said that my plan was, quote, ‘reasonable,’ and was not amnesty. It’s a matter of record.”

McCain delivered some of the petty remarks, too. When Romney, who is notorious for his flip-flops, said that he was going to more fully adopt Barack Obama’s message of change because, “that was the message coming out of Iowa,” John McCain replied, “I just wanted to say to Governor Romney, we disagree on a lot of issues, but I agree you are the candidate of change.”

The attacks were at times almost gleeful. And that may be because Romney has run more negative ads than any of the candidates in the field. He has repeatedly hit Governor Huckabee on his record in Arkansas, and has several ads that imply Senator McCain is too old and out of touch to be president. (He also attacks McCain on immigration.) He has engaged in attack politics, and spent more than the rest of the field combined to do it.

But Romney didn’t want to do it in person. When McCain responded to Romney’s claim of being misquoted in the AP by saying, “When you change issues — positions on issues from time to time, you will get misquoted,” Romney didn’t hit back. He pleaded for civility, saying, “Senator, is there a way to have this about issues and not about personal attacks?”

ROMNEY: But, look, you know, Governor, don’t try and characterize my position. Of course, this war…

ROMNEY: You know, we’re wise to talk about policies and not to make personal attacks.

Romney has demonstrated a willingness to play hardball with his money and his purchased airtime, but tonight he shied from the fight.

There is something to be said for this, however. Nobody looks good getting beat up, but at times, Thompson’s barbs looked churlish, McCain’s looked bullying, and Huckabee’s tarnished his aw-shucks rep. Giuliani may have done benefited the most from the whack-a-Mitt routine simply by not participating and looking like an adult.

For the record, the debate would have been much smaller but for a quirk in Iowa’s primary system. The Iowa Democratic Party has a viability rule built in which means that any candidate who received less than 15 percent of the votes in a caucus room came away with nothing. Thus, candidates like Biden and Dodd who may have consistently polled around 10-14 percent received such a tiny fraction of the actual delegates that they were forced to drop out.

The Republican Party in Iowa has no such rule, which means that a number of candidates who would have done as poorly as Biden or Dodd in the Democratic side appeared to do fairly well and lived to see New Hampshire’s snowy hills. As a result, the Republican debate was larger than the Democratic one.

Frankly, however, the Republicans mind having Ron Paul in there, just to take one example. When it comes to foreign policy, each of the Republicans is trying to identify themselves as the heavyweight, and keeping around a punching bag like Paul (who is more right than any of them, but is a one-man minority in these GOP forums) is a service to the rest of the field.