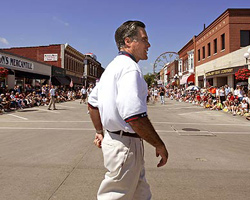 Nevada’s Republicans must feel mighty neglected. Democrats in the state are watching a full-blown drama unfold, with three strong candidates campaigning hard, a powerful union trying to play kingmaker, and a controversial lawsuit unsuccessfully trying to derail the Party’s plans. Meanwhile, the Republicans, who caucus on Saturday, on the same day as the Democrats, have hardly been noticed. There’s no sign that Fred Thompson ever stepped foot in the state, and Rudy Giuliani, John McCain, and Mike Huckabee haven’t campaigned there in recent months. The two exceptions are Mitt Romney, whose personal fortune guarantees he is constantly awash in campaign funds, and Ron Paul. The state’s largest newspaper, the Las Vegas Review-Journal, began its recent endorsement of Romney with the line, “You might not know it, but there’s also a Republican caucus in Nevada on Saturday.”

Instead, the Republicans have all been focused on South Carolina, which has 10 fewer delegates than the Silver State but a Republican primary (not a Democratic one) on the same day. South Carolina’s “proximity to major media centers on the East Coast” is a major reason why the Republican candidates have neglected Nevada, says Steve Wark, a spokesman for the Nevada GOP. “You can have barely two dimes to rub together in your campaign and still manage to get down there to South Carolina.” Then there’s the fact that South Carolina has traditionally held an early spot on the primary calendar and is seen as a bellwether for the rest of the South. The decision to ignore South Carolina has put Mitt Romney in the catbird’s seat, with Ron Paul as the X factor.

In Nevada, Romney has the strongest organization, and he has held at least 20 campaign events in the state in the past year. Paul, for his part, has the most staffers on the ground and has spent heavily on radio advertisements and phone banking. And, as has been typical, Paul has the loudest contingent of volunteers. If there is an exceptionally small turnout on Saturday, as is expected, Paul’s band of insurgents may make a splash. It will be a come-from-behind victory if it happens. Paul is currently polling sixth in Nevada. There is a “little bit more bark than bite,” says Wark.

But no one really knows. This is a strange race: the Nevada Republican Party estimates that 99 percent of eligible participants have never caucused before, and people are confused. The Republican Party has hired a temp agency to handle phone calls from befuddled voters who want details on their caucus sites and instructions on how the process works. So why a caucus instead of a simple primary? And why hold it on the same day as the South Carolina primary?

The last time Nevada held a caucus was 1988. Since then, the parties in the state have held spring-time primaries after the nominees had all but been decided. But the state is now the fastest growing in the nation, and “when you’re a fast-growing state,” says Wark, “one of the things that is always lacking is any kind of continuity and cohesion in party operations.” The hope for both the Democrat and Republicans was that a caucus would get people excited about state politics.

In the end, the decision to hold the caucus on the same day as South Carolina’s Republican primary was pragmatic one. State Democrats moved their date forward in the primary calendar, and the Republicans had to decide if they wanted to do the same. If they did, they would have to choose the same day as the Democrats, January 19, because of what Wark describes as “facilities reasons, economic reasons, and media reasons.” Unfortunately, the South Carolina Republican Party had already selected the 19th as its date. The Nevada GOP bit the bullet and accepted second-class status.

This arrangement gives a substantial leg up to Romney. The former Massachusetts governor has little appeal in South Carolina, according to the polls. He is leaving the state to Mike Huckabee (who presumably has a strong evangelical base there), John McCain (who South Carolina voters still remember from 2000), and Fred Thompson (who needs a good showing to keep his campaign afloat). That means Romney can devote time and money to Nevada in a way that others can’t. In a primary where only 30,000 to 40,000 Republicans are expected to show up (New Hampshire saw just under half a million), it doesn’t take much effort to make a dent.

Another reason why Nevada might like Romney is because its economy is struggling. Michigan voters who identified the economy as their number one issue carried the former CEO to victory. Things aren’t quite as bad in Nevada as in Michigan, but they deserve attention. “The real big issue [for voters] is the economy right now,” says Wark. Nevada has one of the top 10 highest unemployment rates in the country. Economists speaking at a forum sponsored by the Associated General Contractors said that Nevada’s sagging housing market will “muddle through” 2008. Romney’s history of success in the private sector may be exactly what GOP voters in Nevada are looking for.

There’s another factor: Mormonism. “Romney’s Mormonism will not only not hurt him, it will probably help him,” says Eric Herzik, the chair of the Political Science department at the University of Nevada, Reno. “It probably helps in any Mountain West state. It’s a network of voters who will likely turn out.”

That’s unlikely to happen, but it may be the only way Republican caucus-goers in Nevada can participate in something the national media will pay attention to.