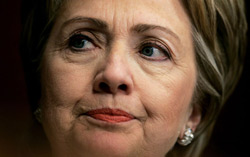 Check out this collection of stories from around the web.

First, there’s a crushing ABC News story about Hillary Clinton’s inaction during her tenure with Wal-Mart.

In six years as a member of the Wal-Mart board of directors, between 1986 and 1992, Hillary Clinton remained silent as the world’s largest retailer waged a major campaign against labor unions seeking to represent store workers….

“I’m always proud of Wal-Mart and what we do and the way we do it better than anybody else,” she said at a June 1990 stockholders meeting.

The story reports that video of Wal-Mart’s many private board meetings never shows Clinton reacting to the other board member’s vicious anti-union statements. The story also reports that Clinton’s main effort on the board, improving conditions for female workers, accomplished little. Further, the story says that Clinton will keep $20,000 in donations from Wal-Mart executives, and that former President Bill Clinton has regular private meetings with Wal-Mart’s current CEO.

Then there is David Broder who writes in the Washington Post that Barack Obama is the Democratic frontrunner, despite Hillary Clinton’s polling leads in many February 5 states. Broder points to establishment Democratic opinion trending toward BHO.

The advantage has shifted back to Barack Obama — thanks to a growing but largely unremarked-upon tendency among Democratic leaders to reject Hillary Clinton and her husband, the former president.

The New York senator could still emerge from the “Tsunami Tuesday” voting with the overall lead in delegates, but she is unlikely to come close to clinching the nomination…

That establishment that is heading Obama’s way? That’s the one the Clintons have owned for nearly two decades. Think we’re done? Oh, no. More after the jump.

In the Wall Street Journal, Michael Zeldin compares the questionable but ultimately insubstantial legal work Clinton did for Jim McDougal in Arkansas that was later investigated by Kenneth Starr to the legal work Obama did for “slumlord” Tony Rezko that Clinton is now using as an attack line her stump speeches. After discussing the truly insignificant nature of the Rezko situation, Zeldin writes:

No one who has ever practiced law, let alone Mrs. Clinton, could argue, with a clear conscience, that these five hours on behalf of a church group that partnered with a man who at a later point in time would be alleged to be a scoundrel equated to knowingly representing a Chicago slumlord. Yet she could not resist leveling the accusation.

I suggest that this provides a window into Mrs. Clinton’s character because notwithstanding the enormous suffering she had to endure when accused of wrongful conduct in her representation of Madison Guaranty — a representation that appears to have been no more than a routine business transaction — she is willing to behave no differently than did her Whitewater accusers if she can gain politically.

And heavens, we’re still not finished. The New York Times reports that Bill Clinton went to the Kazakhstani president and vouched for a Canadian businessman named Giustra seeking inroads into Kazakhstan’s uranium mining business. In a simple quid pro quo, Giustra later made a massive donation to Clinton’s charitable foundation.

The monster deal [that Giustra signed with Kazakhstan] stunned the mining industry, turning an unknown shell company into one of the world’s largest uranium producers in a transaction ultimately worth tens of millions of dollars to Mr. Giustra, analysts said.

Just months after the Kazakh pact was finalized, Mr. Clinton’s charitable foundation received its own windfall: a $31.3 million donation from Mr. Giustra that had remained a secret until he acknowledged it last month. The gift, combined with Mr. Giustra’s more recent and public pledge to give the William J. Clinton Foundation an additional $100 million, secured Mr. Giustra a place in Mr. Clinton’s inner circle, an exclusive club of wealthy entrepreneurs in which friendship with the former president has its privileges.

It may actually be a good thing for Hillary Clinton that all of this muck came out on the same day. There’s only so much oxygen for news stories to breathe. At least one of these is going to wither and die without much attention.

Update: Whoops, thought we were finished. Also out today, news that Obama has raised a stunning $32 million in January, an amount which “roughly equals his previous best three-month fundraising haul.” Howard Dean raised $51 million during his entire campaign in 2004.