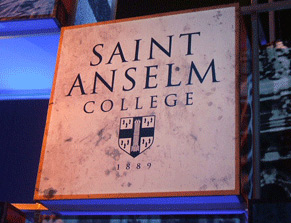 Before you feel sorry for Mitt Romney for getting picked on relentlessly in tonight’s Republican debate at St. Anselm College in New Hampshire, consider the fact that he’s devoted millions of dollars to picking on everyone else.

There was no question who the collected cast of Republican candidates wanted to put between the crosshairs. Time and again, the former Massachusetts Governor was the target of full-scale grenade attacks and small potshots.

They frequently used his words against him. On the topic of the Iraq War, Governor Mike Huckabee looked straight at Romney, who has sniped Huckabee for abandoning the President, and said, “Governor Romney, you yourself on ’60 Minutes’ said that we had left Iraq in a mess. You’ve also said that you weren’t going to have this ‘my way or no way’ philosophy… I supported the president in the war before you did. I supported the surge when you didn’t.”

On immigration, John McCain defended his position from his critics on the right, including Romney, by saying, “Now, no better authority than Governor Romney believed that it’s not amnesty because two years ago, he was asked, and he said that my plan was, quote, ‘reasonable,’ and was not amnesty. It’s a matter of record.”

McCain delivered some of the petty remarks, too. When Romney, who is notorious for his flip-flops, said that he was going to more fully adopt Barack Obama’s message of change because, “that was the message coming out of Iowa,” John McCain replied, “I just wanted to say to Governor Romney, we disagree on a lot of issues, but I agree you are the candidate of change.”

The attacks were at times almost gleeful. And that may be because Romney has run more negative ads than any of the candidates in the field. He has repeatedly hit Governor Huckabee on his record in Arkansas, and has several ads that imply Senator McCain is too old and out of touch to be president. (He also attacks McCain on immigration.) He has engaged in attack politics, and spent more than the rest of the field combined to do it.

But Romney didn’t want to do it in person. When McCain responded to Romney’s claim of being misquoted in the AP by saying, “When you change issues — positions on issues from time to time, you will get misquoted,” Romney didn’t hit back. He pleaded for civility, saying, “Senator, is there a way to have this about issues and not about personal attacks?”

ROMNEY: But, look, you know, Governor, don’t try and characterize my position. Of course, this war…

ROMNEY: You know, we’re wise to talk about policies and not to make personal attacks.

Romney has demonstrated a willingness to play hardball with his money and his purchased airtime, but tonight he shied from the fight.

There is something to be said for this, however. Nobody looks good getting beat up, but at times, Thompson’s barbs looked churlish, McCain’s looked bullying, and Huckabee’s tarnished his aw-shucks rep. Giuliani may have done benefited the most from the whack-a-Mitt routine simply by not participating and looking like an adult.

For the record, the debate would have been much smaller but for a quirk in Iowa’s primary system. The Iowa Democratic Party has a viability rule built in which means that any candidate who received less than 15 percent of the votes in a caucus room came away with nothing. Thus, candidates like Biden and Dodd who may have consistently polled around 10-14 percent received such a tiny fraction of the actual delegates that they were forced to drop out.

The Republican Party in Iowa has no such rule, which means that a number of candidates who would have done as poorly as Biden or Dodd in the Democratic side appeared to do fairly well and lived to see New Hampshire’s snowy hills. As a result, the Republican debate was larger than the Democratic one, which David will post on later tonight.

Frankly, however, I don’t think the Republicans mind having Ron Paul in there, just to take one example. When it comes to foreign policy, each of the Republicans is trying to identify themselves as the heavyweight, and keeping around a punching bag like Paul (who is more right than any of them, but is a one-man minority in these GOP forums) is a service to the rest of the field.

Oh, and PPS — Kudos to ABC and its partners for running what was largely a substance-filled debate. They asked solid questions and allowed just the right amount of back and forth.