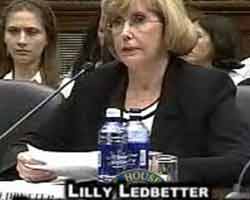 Lilly Ledbetter got her 15 minutes of fame, but a little press won’t cover the mortgage. The 59-year-old mother of two had spent 19 years working at the Goodyear tire factory in Gadsden, Alabama, as one of the few women in a supervisory position. In 1998, after learning she’d been getting paid far less than men doing similar jobs, she sued Goodyear under the 1964 Civil Rights Act, alleging gender discrimination in the performance evaluations that had resulted in her lower pay. Five years later, with the backing of the Equal Employment Opportunity Commission, Ledbetter won a $3.8 million jury verdict against the company. But Goodyear appealed all the way to the U.S. Supreme Court, which ruled against Ledbetter last June. The court’s conservative faction concluded that Ledbetter was obliged to sue within 180 days of receiving her first discriminatory paycheck, and was therefore out of luck.

The 5-4 decision reversed decades of established law in most states. The EEOC had long held that each discriminatory paycheck resets the clock on the statute of limitations, so that workers could sue from the time they learned of the pay disparity, not from the date the disparity began. That makes sense: Most people don’t know what their colleagues are paid, and many companies actively forbid workers from discussing their salaries on the job. Ledbetter only learned how badly she was underpaid after someone put an anonymous note in her mailbox listing the salaries of some of the factory’s male supervisors—by that time, she’d been getting smaller paychecks for years.

The Supreme Court ruling effectively prevents anyone from suing under federal equal-pay laws, and creates a perverse incentive: So long as an employer manages to keep an employee’s discriminatory compensation under wraps for six months, he or she is then free to continue discriminating against the worker without fear of lawsuits. Justice Ruth Bader Ginsburg was so outraged by the majority decision that she read her scathing dissent from the bench. “In our view, the court does not comprehend, or is indifferent to, the insidious way in which women can be victims of pay discrimination,” she said, and urged Congress to “correct this parsimonious reading” of the civil rights law.

Overnight, Ledbetter became a cause célèbre as an angry public responded to the decision. Hillary Clinton has invoked Ledbetter routinely on the campaign trail, and members of Congress from both parties jumped to introduce legislation to overturn the ruling. The House worked fast, and passed a bill restoring the old rules for equal pay suits within a matter of weeks. Action in the Senate has been a different story. Despite bipartisan sponsors on the bill, senators didn’t even get around to holding a hearing until late last month, and the legislation now appears stalled in the face of stiff opposition from business groups thrilled by the Supreme Court decision.

These groups claim that the proposed law would bring a flood of new lawsuits related to decades-old facts, and burden companies with expensive record-keeping requirements and other paperwork hassles. After the January hearing, Wyoming senator Mike Enzi, the ranking Republican on the Senate Health, Education, Labor and Pensions Committee, called the Fair Pay Restoration Act “unfair and unreasonable” and said the bill would do nothing but “keep America’s trial lawyers and employment bar busy.”

Jocelyn Samuels, the vice president for education and employment at the National Women’s Law Center, says such arguments are misguided, and points out that employers lived under the old rules for a long time without enduring a barrage of discrimination claims. “Prior experience suggests this is a reasonable rule to apply,” she says. Groups lobbying for the bill seem to think the senators will come around. “We’re optimistic that they’re going to mark it up and send it to the floor in the next few weeks,” says Jocelyn Frye, general counsel for the National Partnership for Women and Families.

In fact, as Lilly Ledbetter fades from the public memory, the bill she inspired is languishing. Supporters acknowledge that there is no current plan to get it out of committee, despite strong support from committee chair Ted Kennedy. President Bush, meanwhile, has threatened to veto the bill if it reaches his desk.

The Senate’s failure to take on the judiciary has implications beyond workplace gender discrimination. In Ledbetter v. Goodyear, the top court’s conservatives ignored the original intent of the Civil Rights Act. According to Simon Lazarus, public-policy counsel to the National Senior Citizens Law Center, this court has similarly defied congressional intent on everything from litigation against the companies that helped Enron defraud its shareholders to cases involving mandatory binding arbitration, and lawmakers have done nothing about it.

The Ledbetter case, he adds, is hardly the first time a far-right Supreme Court has tried to gut American civil rights laws—justices made similar attempts under the late chief justice William Rehnquist in the late 1980s, but Congress responded in 1991 with new legislation to overturn the changes. In Lazarus’ view, the apparent unwillingness of today’s Congress to check judicial power will only embolden the Supreme Court to behave even more radically. The justices, he says, “get away with it with impunity right now because Congress is not just sclerotic but structurally unable to act.”