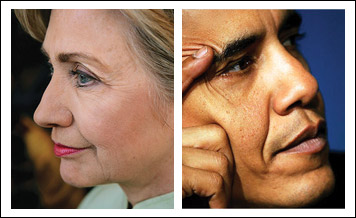 The Clinton camp has unveiled two new attacks on Barack Obama: (1) He plagiarized a handful of lines in one of his speeches from Deval Patrick, the Governor of Massachusetts and a prominent Obama supporter, and (2) he once promised to accept federal funds in the general election if the GOP candidate agreed to do the same, in a move that would honor and preserve the campaign finance system in this country, but has abandoned that pledge as greenbacks have flowed in by the tens of millions.

Let’s tackle the plagiarism first. As you can see at this site, there is indisputable video evidence that Obama used about 30 seconds of Patrick’s speech without crediting him. The problem, and you can see this at the link above, is that Patrick himself told Obama to use the content because the attacks Obama is facing in this campaign about substituting style/words/speechifying for substance are attacks Patrick faced when he ran for Governor of Massachusetts. Does this make the plagiarism okay? No. But does it basically make the story a non-issue? That’s for the voter to decide. I suspect so.

There’s also the fact that Clinton has lifted lines from Obama’s speeches on occasion, including Obama’s signature “Fired up and ready to go.” But if Obama points that out, he’s playing Clinton’s game. If Obama says, “Sure I steal, but you steal, too” what the voters will likely hear is “We’re both politicians, so what’s the problem?” And that diminishes Obama’s transcendent, new-politics appeal.

As for the financing charge — about a year ago, Obama did indeed call on the eventual general election candidates to use public financing instead of hounding the American people (and God knows how many shady figures) for the hundreds of millions it takes to run a presidential campaign. Now that he’s got the most dominant fundraising machine in American history, Obama is ignoring that pledge. This is a legitimate argument for John McCain to make, since he’s likely to accept public financing due to his relatively anemic fundraising thus far. But it’s a bit silly coming from Hillary Clinton, who was the first candidate to blow off public financing, in anticipation of historic fundraising totals.

In the end, these attacks are little more than an attempt to divert media attention from Obama’s impending victories in the WI/HI primaries tonight. And don’t be surprised that these attacks aren’t stronger: If HRC had anything better on Obama, we would have seen it by now.

Update: Two things I should have mentioned. (1) More or else every speech a politician delivers is “plagiarized,” because it was written by speechwriters. There isn’t an awful lot of originality coming from these people. (2) Obama bucks this trend a little bit, because he speaks off the cuff beautifully from time to time.

Update: This plagiarism thing apparently has legs. The Clinton campaign just zapped around this link, which argues that Deval Patrick’s explanation of how he offered his lines to Obama doesn’t make sense. Then the Huffington Post posted this link, arguing that H. Clinton borrows lines and themes from B. Clinton. I refuse to give further developments of this story a new blog post.