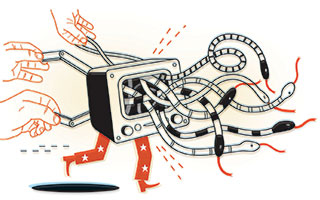 Forget Swift Boats; this election year could become the battle of the armadas. Thanks to the success of misleading ads against John Kerry in 2004—as well as recent Supreme Court and Federal Election Commission actions—the current presidential contest promises to be more cacophonous and mud strewn than any in recent history, with a record number of down-and-dirty ads financed on the sly by big-money interests. Attacks bankrolled by “independent” groups—businesses, unions, and millionaires—and amplified by YouTube and reporters starved for news “will play a much greater role than ever before,” predicts a top gop strategist.

There’s just one catch: Groups that make it their express aim to influence federal elections—campaign and party committees, for example—are limited to $5,000 contributions from individuals and can’t take money from corporations or unions. But recruiting enough $5,000 donors to underwrite a multimillion-dollar ad buy is a chore. So for those hoping to destroy a candidate with a clever spot or a cheap shot, the key question is which campaign-finance loophole to use.

In 2004, the answer was 527 committees, named after the tax-code provision covering them. These groups can take unlimited donations. Billionaire George Soros alone gave nearly $24 million to 527s that year, including America Coming Together and the Media Fund, which together netted about $140 million in support of John Kerry. On the gop side, the Swift Boat Veterans for Truth and the Progress for America Voter Fund raised about $58 million, of which T. Boone Pickens pitched in $4.5 million.

The Federal Election Commission recently ruled that these four 527s had violated campaign-finance law—that they essentially were campaign groups in disguise and should have abided by the $5,000 limit. Yet for what amounted to nearly $200 million in illegal spending, the groups were fined, in total, only $2.4 million, three years after the fact—a punishment easy to dismiss as “the cost of doing business,” in the words of Fred Wertheimer, president of the clean-campaign advocacy group Democracy 21.

Nevertheless, the fec action has made some donors think twice about 527s, says Wertheimer—which is why political operatives are busy cooking up other stratagems. One involves funneling money to nonprofit advocacy groups like MoveOn and the nra, known as 501(c)(4)s after another tax provision, for voter organization efforts and election-related ads. (Donations to these organizations, unlike those to educational and charitable nonprofits known as 501(c)(3)s, aren’t tax deductible; many groups, such as the Sierra Club, have both a (c)(3) and a (c)(4) arm.) Under the 2002 McCain-Feingold act, these advocacy groups were banned from running “issue ads” directed at candidates within two months of a general election. But the Supreme Court modified that ban last June. Now a nonprofit could, say, run a spot just before election time noting that Candidate X once voted against building a wall on the Mexico border, warning that—cue the ominous music!—X is willing to let terrorists sneak into the United States, and exhorting viewers to call X to register their outrage. So long as the ad hasn’t (officially) been coordinated with X’s opponent and doesn’t outright say “vote against X,” it’s fine. And here’s the best part: There are no limitations on the size of a contribution to a (c)(4), nor do its donors have to be disclosed. Moreover, due to that same Supreme Court decision, unions and corporations can now directly finance their own issue ads, expanding the number of players who can slam—or slime—the candidates in 2008.

Wertheimer identifies a few outfits likely to emerge as major independent spenders this year. On the gop side, a likely big player is Freedom’s Watch, a (c)(4) founded last summer. In 2007 the group—whose top donor has been casino mogul Sheldon Adelson—spent at least $15 million to support the surge in Iraq, and according to spokesman Jake Suski, it plans to expand its operations in 2008. (See “Betting on Red” in our last issue or at MotherJones.com.) In the Democratic camp, strategists including Clinton White House chief of staff John Podesta and Service Employees International Union (seiu) official Anna Burger have launched a 527 named the Fund for America to raise money and distribute it to (c)(4)s doing voter organization in 10 to 12 key states; a parallel entity headed by Tom Matzzie, the former head of MoveOn’s Washington office, will produce issue ads aimed at undercutting the Republican nominee. The Fund for America is hoping to raise at least $100 million.

The legality of this circuitous strategy, admits one Fund for America official, is not fully tested: “We’ve built into the budget a little money in the expectation that we’re unintentionally going to go beyond the boundaries of the law. We know we’ll get challenged and will have people watching us every step of the way.” The good news for the independent spenders is that a congressional tussle over the appointment of commissioners left the fec with four of its six seats vacant at the start of the year, effectively shutting it down. “If you believe there’s no sheriff in town,” Wertheimer says ruefully, “anything goes.”

Sure enough, the primary season has already seen some sneaky independent action. Prior to January’s Iowa caucuses, a (c)(4) called Common Sense Issues set up the website TrustHuckabee.com to recruit pro-Huckabee precinct captains—a blatant and probably prohibited scheme to create a parallel campaign infrastructure. (“They are looking at a lot of litigation,” says a former fec official who asked not to be identified. “This is way beyond anything anybody should try.”) And a 527 named Alliance for a New America, financed in part by seiu affiliates, ran issue ads in Iowa hailing John Edwards’ anti-lobbyist proposals. The Alliance received $495,000 from Rachel “Bunny” Mellon, the 97-year-old daughter-in-law of industrialist Andrew Mellon. A lawyer holding power of attorney for Mellon is an Edwards supporter, and he refused to explain how the generous contribution had come about.

Clearly, political operators weren’t very fearful of the fec or irs. The recent rule changes, though, could make Swift-Boat-style character assassination tougher this year. If a 527 or (c)(4) group funded by unlimited contributions produces ads attacking a candidate’s past or fitness for office, it will be difficult for the group to claim them as issue ads. “I suppose a group can say, ‘We’ll file as a 527 not for the purpose of influencing the election, but to educate the public on the quality of the candidates,'” says Jan Baran, a veteran Republican campaign-finance lawyer. “But that would be skating on thin ice.”

Which leaves the diy option: There are no restrictions on how much an individual can spend to influence an election, as long as she or he doesn’t coordinate efforts with a candidate or party. Though most big-money people prefer a degree or two of separation from bare-knuckle politics, this year’s high stakes could nudge some in that direction. “There is the possibility a billionaire will spend $100 million on the presidential campaign ‘just because I feel like it,'” says Democratic consultant Guy Molyneux. “There’s the potential for a huge ratcheting up. And we will see some pretty tough stuff.” After all, the lesson of 2004 was that it only takes one good ad campaign to undo a candidate.

“We’re looking at an enormous shift in control from parties and candidates to outside groups,” says the former fec official. “For a candidate, this can mean a loss of control of your message. And this also covers congressional candidates. Imagine if three weeks before the election, someone dumps $600,000 into your House race and you have no idea who it is.” Candidates, he adds, “should be scared. Very scared.” Maybe voters, too.