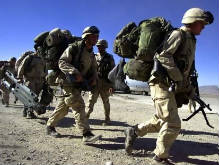 The American Enterprise Institute (AEI)—bastion of neocon thought, leading Iraq war pusher, and (a day late and a penny short) deviser of the “surge” strategy that at least helped mitigate some of the resulting carnage—is now focusing its collected wisdom on the war in Afghanistan. As Sean Naylor reports in the latest issue of the Navy Times, AEI’s Afghanistan Planning Group, an assemblage of about “two dozen” experts, concluded three days of meetings on January 27. The project was led by Fred Kagan, one of the chief architects of “Choosing Victory—A Plan For Success in Iraq,” which formed the basis of the Bush administration’s decision to send 30,000 additional troops to Iraq early last year. Conservatives have lauded the “success” of the Iraq surge as evidence of a turnaround in American fortunes there. (Others, it should be pointed out, see the diminishing violence as a logical result of the ferocious ethnic cleansing that burned through Iraqi neighborhoods in the past couple of years.) AEI insists that the group’s work was undertaken independent of the White House, but acknowledged that the official findings, which have so far not been released publicly, will be shared with government officials in the coming weeks.

According to Naylor in the Navy Times, those findings include:

* Deploy an extra U.S. brigade into Kandahar and a Marine battalion into Helmand in 2008 and maintain that force level through 2009. Some 28,000 U.S. troops are now in Afghanistan, about half the total coalition force there.

* Provide NATO forces in southern Afghanistan, where the Taliban are strongest, with the necessary “enablers” such as engineers, aviation, surveillance and command and control assets.

* Threatening the Pakistanis with unilateral U.S. strikes into Pakistani territory unless the Pakistanis take the initiative to clear al-Qaida’s safe havens themselves.

* Making U.S. military aid to Pakistan — which is largely aimed at bolstering Pakistan’s conventional forces that are focused on the perceived threat from India — contingent on the Pakistani government asserting itself throughout the Baluchistan and the North West Frontier Province, as well as in the Federally Administered Tribal Areas, which have traditionally enjoyed autonomy.

This last one seems to have been accounted for in the latest Defense Appropriations Bill, namely in the $75 million appropriation for Pakistan’s “Frontier Corps,” a paramilitary force in Pakistan’s tribal area. As in the case of our newfound friends in Anbar province, some question the wisdom of pouring money into a force of uncertain (and historically shifting) loyalty.