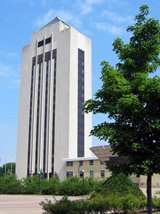 Unfortunately, yesterday’s shooting at Northern Illinois University seemed quite familiar. Young man in dressed in black walks into a school, shoots and kills five students, injures dozens more, and then shoots himself. He was mentally ill, unpredictable, acting strange in the weeks before the event. The public safety director of Northern Illinois University’s response: “Unfortunately, these things happen.”

But “these things” are happening with frightening frequency. Just last April, the Virginia Tech shootings left nearly three dozen students dead. And that was after the perpetrator, who had a history of mental illness, had filmed himself with guns. And Virginia Tech happened years after similarly violent incidents at Columbine, Jonesboro, Red Lake, and Nickel Mines.

In 2008, a year less than two months old, fatal shootings have taken place at Louisiana Technical College and at E. O. Green School in Oxnard, California. A list of shootings and stabbings in K-12 schools for the 2007-2008 school year from a security services firm is sobering.

And yet each time students die, we ask ourselves the same questions. How can universities and schools be made safer? “Universities for decades, for hundreds of years, have been open institutions—the most open institutions,” the president of NIU said. “And events like this and Virginia Tech and others are forcing us to reconsider how we do things. I think that is unfortunate but necessary.”

But should the question really be how schools can be made safer? In many cases, shooters didn’t go inside the school, but instead shot students from outside it. Wouldn’t the simpler solution be to make sure handguns stay out of the hands of children and those with a history of mental illness? Sure it would, if only we didn’t have a rabidly pro-gun population whose views are backed up by the powerful gun rights lobbyists in Washington. The issue of gun control always comes up in the wake of school shootings, but reforms—like the bill recently signed by President Bush providing funding to help states track and report prohibited gun buyers, including those who had been involuntarily confined by a mental health institution—are easily sidestepped by lax enforcement and by a loophole that allows dealers at gun shows to sell arms to anyone without first conducting background checks.

Until we get a handle on our gun problem, we will be forced to accept that “these things happen.”