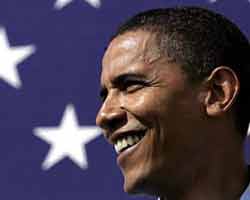 Last week, when Barack Obama became the first major candidate to break the silence on the situation in Gaza, he didn’t criticize Israel, whose blockade of a civilian population has been roundly condemned by human rights organizations, nor did he call for restraint from the United States’ top ally in the Mideast. Instead, he fired off a letter to U.N. Ambassador Zalmay Khalilzad with a resounding message—one that could have been mistaken for words straight from the American Israel Public Affairs Committee’s (AIPAC) website. “The Security Council should clearly and unequivocally condemn the rocket attacks against Israel.… If it cannot…I urge you to ensure that it does not speak at all,” Obama wrote, adding he understood why Israel was “forced” to shut down Gaza’s border crossings.

The letter was notable not only because Obama had distinguished himself from the rest of the field (John McCain later sent a similar letter to Condoleezza Rice), but also because it was a far cry from the Obama of last March, who let slip a rare expression of compassion for Palestinians by an American politician: “Nobody’s suffering more than the Palestinian people” he famously said at a small gathering in Iowa. What ensued in the 10 months between then and now is an object lesson in the intense pressure under which presidential candidates stake out ground on the Israeli-Palestinian conflict, and the extraordinary effectiveness of the self-styled “pro-Israel” movement. This high-pressured atmosphere goes a long way to explaining why the candidate with the most liberal foreign policy views went out of his way to take a hard line on Gaza.

Obama’s shuffle with the pro-Israel lobby follows in a long tradition of Democratic candidates facing a litmus test on the issue. Hillary Clinton, for her part, has enjoyed wide support among pro-Israel advocates, having made her peace with them back in 1999 after a controversy involving the lobby hurt her Senate campaign. And as Super Tuesday approaches—the day when many Jewish Democrats vote, in states like New York and California (where respectively 17 and 6 percent of primary voters identified themselves as Jewish in 2004)—Obama has aggressively moved to shore up his pro-Israel credentials, dispatching Jewish supporters to drum up support and hosting a lengthy conference call with Jewish reporters Monday. In part, the call was to counter chain e-mails, which have intensified in recent weeks, painting Obama as a “secret Muslim,” but he also used a chunk of the time to make it known that he was a friend of Israel: “I want to make sure that we continue to strengthen the enduring ties between our people and pledge to give real meaning to the words ‘never again,'” he said.

From the beginning, Obama has received more scrutiny on the issue of Israel than any other presidential candidate—something of a paradox given that he shares a uniformly pro-Israel record and policy platform with the major contenders from both parties. The suspicion of pro-Israel advocates for Obama was most recently captured in a January 23 Jerusalem Post op-ed in which Danny Ayalon, the former Israeli ambassador to the U.S., called the senator’s candidacy cause for “some degree of concern.” A memo by a top official at the American Jewish Committee, recently leaked to the Jewish Daily Forward, neatly outlined the roots of this concern: In the late 1990s Obama reportedly called for an even-handed approach to the conflict; his pastor had praised Louis Farrakhan; he has called for diplomacy with Iran; and, of course, he was once photographed breaking bread with the late Palestinian-American academic Edward Said.

There are plenty of other theories for why Obama has been so closely scrutinized on the issue Israel. “One, he is black, and in general it would be expected that black people are more sympathetic to the Palestinian people,” Ziad Asali, president of the American Task Force on Palestine, a group that advocates for the creation of a Palestinian state, told me in trying to explain the scrutiny on Obama. M.J. Rosenberg of the Israel Policy Forum, a dovish advocacy group, echoes Asali: “The more right-wing segments of the Jewish community are the least likely to be comfortable with an African-American president.” Two, Asali said, Obama is young and perhaps open to new interpretations of the conflict, and, “thirdly, his middle name is Hussein, so he’s more suspect than a John Smith.”

And no media outlet has done more to pressure Obama on the issue than the New York Sun, the de facto house organ of the pro-Israel lobby. Since its creation in 2002, the newspaper has been practicing a unique brand of gotcha journalism concerning Israel and Palestine. And Obama has consistently responded, no matter how trivial the issue. In March, after George Soros wrote an article calling for negotiations with Hamas, a Sun reporter took it upon himself to seek comments from several Democrats, including Obama. A spokeswoman issued a dissent from Soros and reiterated that the senator shared AIPAC’s position on the issue. A few months later, in response to a Sun query, the campaign distanced Obama from some members of his national church who had passed resolutions critical of Israel. Then, last September a Sun reporter noticed a small barackobama.com ad on the Amazon page of The Israel Lobby, Stephen Walt and John Mearsheimer’s book that critiques the lobby’s role in U.S. policymaking. Within hours of being contacted by the Sun, the campaign issued a statement slamming the book and had the ad—although it had been completely unintentional—pulled from Amazon’s site.

“[Pro-Israel advocates] have him in a position where he has to keep demonstrating his pro-Israel bona fides,” says Rosenberg. “This is done every four years, pretty much in every election. Whoever is deemed to be the most liberal candidate is put on the defensive on Israel.”

No one knows this better than the candidate deemed most liberal in 2004—Howard Dean. Like Obama, Dean was relatively new on the national scene and possessed liberal-leaning foreign policy views—parallels that help explain why in 2003 Dean faced an Israel problem all too similar to Obama’s today. But Dean went further on Israel, at least rhetorically, than any of the candidates have this cycle, saying the U.S. should be “even-handed,” that “it’s not our place to take sides,” and that “enormous” numbers of Israeli settlements would have to be dismantled. That talk prompted a barrage of negative press coverage and earned him a pair of scolding letters, one from Abe Foxman of the Anti-Defamation League and another from 34 congressional Democrats. And, yet, strangely, Dean’s actual position on Israel was expressly in line with President Bush and his Democratic rivals. His campaign was co-chaired by former AIPAC president Steve Grossman. Nevertheless, as Grossman later acknowledged, Dean lost support over those comments. Sound familiar?

Obama experienced a mini-version of the Dean treatment after his statement about Palestinian suffering in March. When David Adelman, a prominent Iowa Democrat and AIPAC member, shot off a letter to Obama calling the comment “deeply troubling,” a spokesman scrambled to run damage control, telling the AP that Obama believes “in the end, the Palestinian people are suffering from the Hamas-led government’s refusal to renounce terrorism.” Aides met personally with Adelman, who told the Des Moines Register he was “satisfied with their response.”

The campaign let the quote stand for six weeks. Then, in the first debate, before a televised audience of around two million, Brian Williams asked the senator if he stood by his comment. Obama bailed. “Well, keep in mind what the remark actually, if you had the whole thing, said.… [N]obody has suffered more than the Palestinian people from the failure of the Palestinian leadership to recognize Israel…” For the candidate who is selling hope, it was a fairly cynical move.

John Edwards, who has always hewed to the AIPAC consensus on Israel, received little sustained scrutiny on the issue. Hillary Clinton, for her part, settled her debts with the Israel lobby years ago. On a Mideast trip in 1999, the First Lady hugged and kissed her Palestinian counterpart, Suha Arafat, at an event where Arafat had accused Israel of using poison gas on civilians. The incident was pumped into a media firestorm and memorialized in a commercial taken out by the Republican Jewish Coalition. Hillary went on to win her Senate seat in 2000 with an unusually slim majority of New York’s Jewish vote. “The whole purpose of manufacturing that controversy when there was none was to put Hillary in a place where she would have to be hawkish on Israel,” Rosenberg says.” And Hillary has gone for it completely. She’s been compensating for it ever since.” Clinton now effectively outflanks Obama on the right with her call in September for “an undivided Jerusalem as [Israel’s] capital.”

It’s unsurprising, then, that Hillary is clearly the favored Democrat of the pro-Israel establishment. Since 2004 when Obama first ran for Senate, he has received $93,700 of pro-Israel PAC money, while Hillary has gotten $349,073 during the same period. In the 2008 cycle, while the numbers are still quite low, Hillary has attracted five times more pro-Israel money than Obama.

All the same, the Obama campaign’s loud protestations of support for Israel have been enough to placate the New York Sun‘s editors, who penned an editorial in early January noting “he has chosen to put himself on the record in terms that Israel’s friends in America…can warmly welcome.” That piece, Politico reported, was “promptly and widely” circulated by Obama’s people.

Even if Obama has allowed himself to be painted into a corner on Israel, some hold out hope that his natural inclinations on the conflict are more moderate than his pronouncements. “Based on my conversations with Obama, I have a very strong belief that he shares the Tikkun perspective, which is pro-Israel and pro-Palestine both,” says Rabbi Michael Lerner, editor of the progressive Jewish journal Tikkun. “I’m cautious in saying I’m 100 percent sure because there was a time when Hillary Clinton said, ‘Michael I’m totally with you and Tikkun on Israel/Palestine.’ That was when I was supposedly her guru in 1993. Now, she went a very far distance from that later on.”

Lerner’s likely right to approach the issue with a degree of skepticism. This Thursday Marty Peretz, the pro-Israel New Republic editor, devoted an article to vouching for Obama, declaring he could be trusted by “friends of Israel.” And if the conduct of his campaign has shown anything, it’s that what Obama might believe “in his heart” and how a President Obama would approach the Israeli-Palestinian conflict are two very different matters. “Will he have the courage to stand up to the Israel lobby and push Israel toward peace?” Lerner asks. “I sincerely doubt it. I see no reason to believe that he will take on that struggle.”