The conciliatory moment at the end of the Democrats’ debate last week in Texas wasn’t a sign of things to come. In fact, it was more of a head fake by Hillary Clinton, who has launched several attacks on Barack Obama in recent days, some of which are downright nasty. The remaining week before the primaries in Texas and Ohio may be a slimy one for the Democrats.

It started last week when the Clinton campaign attempted to connect Obama to two Hyde Park radicals that were part of the domestic terror group known as the Weather Underground. The pair, who are unrepentant about setting bombs in government buildings in the 1960s (possibly because they took care to avoid harming any bystanders), hosted an event at their house in the mid-1990s that Obama attended. One of them donated $200 to his state senatorial campaign. The connection is a weak one; there is no evidence Obama has a relationship with these people. What’s more, Bill Clinton pardoned a different member of the Weather Underground, also unrepentant, who had served 16 years in prison on federal charges. The attack didn’t get much traction in the press, but will undoubtedly be raised again by the McCain campaign should Obama win the Democratic nomination.

The Clinton assault on Obama then moved to Ohio.

On Saturday, Clinton went nuclear on Obama for distributing two mailers in the Buckeye State that she feels unfairly represent her positions on health care and NAFTA. Video of the tirade (and I don’t use that word in a pejorative sense; objectively speaking, Clinton went on a tirade) can be seen at right. The sniping back and forth on these two issues has gotten so vicious that neither campaign has clean hands, though in my judgment Obama is mostly right about Clinton’s record on NAFTA (she pushed it, along with other Clinton administration officials, when her husband was president) while Clinton is mostly right about health care (Obama’s claim that folks who are unable to afford health care will have their arms twisted by an H. Clinton Administration until they pony up is fear-mongering about a core progressive objective). Factcheck.org has already done the heavy lifting on this subject, so I’ll point you to it: go here for an analysis of the campaigns’ disagreement over trade, and here for the same on health care.

After the diatribe in Ohio, Clinton moved to Rhode Island on Sunday, where she mocked Obama’s message of unity and hope. With the video at left, you can judge for yourself if she crossed the line. It’s safe to say that Clinton oversimplifies Obama’s approach to government and theory of change. It also belittles inspiration and unity’s power to push an agenda. The best that can be said of it is that it contains no factual errors and is probably par for the course in a presidential campaign.

And then, finally, we’ve got the Drudge photo (below). Just before 7:00 am this morning, Drudge posted a photo of Obama in Somali garb with the headline “CLINTON STAFFERS CIRCULATE ‘DRESSED’ OBAMA.” Circulating the photo is dirty politics at its worst: It provides fodder for the wing-nuts who are making the case, in emails and fliers, that Obama is a secret Muslim who doesn’t say the pledge of allegiance and was educated in madrassas. If you don’t think that photo will be passed around every day until the general election, you’re crazy. 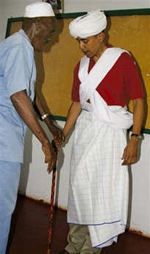 If Barack Obama’s campaign wants to suggest that a photo of him wearing traditional Somali clothing is divisive, they should be ashamed. Hillary Clinton has worn the traditional clothing of countries she has visited and had those photos published widely.

This is nothing more than an obvious and transparent attempt to distract from the serious issues confronting our country today and to attempt to create the very divisions they claim to decry.

This, of course, is nonsense. The Clinton campaign knows that Obama dressed in stereotypically African or Muslim gear plays different than Clinton dressed in the same. Clinton communications director Howard Wolfson shuffled when he was asked about the statement’s lack of a clear denial in a conference call with reporters this afternoon. “No,” said Wolfson when asked if someone in the campaign had sent the photo to Drudge. “Not to my knowledge.” Later, he was asked if he would press the staff to reveal if they had sent it. He responded by citing the size of the campaign. “I’m not in the position to ask 700 people to come in and answer questions about [the picture],” he said. “I was not aware of it, the campaign didn’t sanction it, and did not know anything about it.” In other words, it’s not that they didn’t send the photo; it’s that they don’t know if they did. But they would be angry if they found out that they had.

It’s possible the Clinton campaign isn’t behind this. But the campaign has a history of trying to use racism against Obama. It’s not a stretch to think in these desperate days it would use xenophobia as well. Moreover, the timing of the photo’s release fits into a pattern of attacks that the Clinton campaign has orchestrated over the past half-week. With Clinton’s chances of winning the nomination diminishing, the campaign may have decided it is going to go nasty before it goes away.