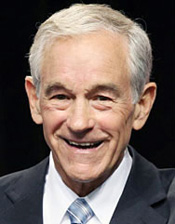 Ron Paul released a video yesterday in which he urged his supporters to stick with the campaign even though John McCain has been all but crowned as the Republican nominee. “Keep going and keep fighting,” Paul implores.

Paul says that he will devote a larger share of his time to defending his congressional seat from a strong primary challenge, but after that’s taken care of on March 4, he will pursue the nomination all the way to the convention. The hope is that he will collect enough delegates so that either a “surprise” will happen and he’ll somehow get the nomination, or he will be able to “play a vital role” in giving the nomination to someone else.

For the time being, Paul suggests a new project. “We ought to make a grand display. We ought to have a true march to show what our numbers are,” he says. A truly impressive “march on Washington” would mean the “media can’t ignore us.” He might want to rethink that — the media had an awfully easy time ignoring hundreds of thousands of anti-war protesters before the Iraq War.

My libertarian friend (a big Ron Paul supporter) dropped me an email and suggested that Paul use his cash haul to fund libertarian candidates in a couple key House races, and maybe even a Senate race or two. A couple libertarian House members likely wouldn’t have much of an effect, considering the size of the Democratic majority in that body, but a single libertarian senator (needn’t be a “Big L” Libertarian, just a “small l” libertarian) could have enormous sway, assuming the close margin of the Senate holds. Tiny minority parties in many other countries stay relevant this way — they partner with larger parties in exchange for key concessions.

The problem is, there isn’t an army of libertarian candidates out there.

According to Sean Haugh, Political Director of the Libertarian Party, there are 80 announced candidates for U.S. House and nine for U.S. Senate (three in Texas) that are libertarians. In some states, those candidates have to register under different names in order to get on the ballot, but Haugh counts them as ideological allies. “We’ve never elected anybody to Congress,” says Haugh. “And there’s not really one running that I would name where I could say they’re going for the win. We focus more on local office. We take a real grassroots approach to this. Those folks are running to make sure there is a libertarian choice on the ballot.”

But while the enthusiasm and the dollars Ron Paul has churned up may not lead to more libertarian leadership in Washington, it will lead to more libertarianism nationwide. “Ron Paul’s done a fantastic job for us,” says Haugh. “The main thing is to get people active in politics for liberty and the Constitution. He’s done a really amazing job on getting out people who had given up on politics and giving them a reason to be involved.”

He says that the Libertarian Party ranks have not swelled because of Paul’s influence. “In fact, it was the opposite,” says Haugh. “A lot of libertarians went off to work on the Ron Paul campaign. A lot of our people switched their party affiliation to Republican so they could vote for him. But I try to look at the big picture.” And no matter what kind libertarian you are, Ron Paul has been good for the big picture.

Here’s the video referenced above: