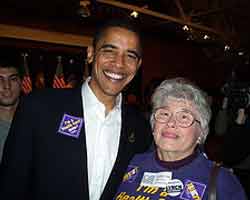 The national executive board of the Service Employees International Union (SEIU) endorsed Barack Obama Thursday evening. The members of the board voted electronically following a conference call that was scheduled for 6 p.m. A high level union official tells Mother Jones there was “overwhelming support” for Sen. Obama during the call. The endorsement doesn’t become official until union locals representing 60 percent of the SEIU’s members actually email in their vote, the official said. The locals have until 7:00 a.m. on Friday to do so, but given the results of the conference call any change in course seems highly improbable. An email from the union confirmed it will make a “major political announcement” on Friday at 1:00 p.m.

The SEIU has stayed neutral in the national contest until now, allowing its state affiliates to endorse any candidate. Many of the state organizations backed former Sen. John Edwards. But Edwards dropped out of the race shortly after a poor showing in South Carolina, where where he was born.

The SEIU’s endorsement comes at a crucial time. Hillary Clinton, who has lost eight straight contests since Super Tuesday, is leading in the polls in Ohio and Texas, two delegate-rich states that will vote on March 4. Wins there could conceivably help her narrow the lead Obama has recently opened up in the delegate count. But the SEIU endorsement could alter the balance.

With nearly two million members, SEIU is the fastest-growing union in North America. It is also perhaps the most politically influential. A November 2006 National Journal ranking (PDF) placed the SEIU first among 20 major national interest groups in terms of political clout. The candidates the union supported had a win-loss record of 10-4 in “competitive” races during the 2006 election cycle. It registered over 4 million new voters and its members knocked on 10 million doors during the 2004 election cycle. It has won battle after battle organizing janitors in Texas, gaining 5,300 members in Houston alone in the past two years. And it has about 27,000 members-cum-potential-door-knockers in Ohio and around 100,000 total in Ohio, Wisconsin, and Pennsylvania. That’s a lot of political action.

The endorsement could also have an effect on SEIU members from demographics that have been voting for Clinton. The union likes to trumpet the fact that it is the “most diverse” union in the United States. Fifty-six percent of SEIU members are women, and it represents more immigrant workers—who are often Latinos—than any other union in the United States. Its members also include many working-class whites. All three groups—women, Latinos, and working-class whites—have tended to vote for Clinton this year. If the SEIU’s political muscle helps turn those groups toward Obama, especially in Ohio and Texas, this endorsement could prove decisive.

All this positive news for Obama comes with an important caveat: the huge California State SEIU (656,000 members) endorsed Obama five days before that state’s primary. Sure, there wasn’t much time before the election to get out the vote, but Clinton still won the state by around 10 points. By endorsing much earlier this time, the national board seems to have learned from the California state council’s mistake. (Of course, the Washington state SEIU also endorsed Obama just days before that state’s Democratic caucus, which Obama won handily.)

Another boost for Obama will come from the United Food and Commercial Workers (UFCW) union’s endorsement, which was also decided today. That group has 69,000 members in Ohio and another 26,000 in Texas, according to the AP, and its political organization could do just as much as the SEIU to help Obama rally supporters and get out the vote in those battleground states.

The SEIU and UCFW endorsements should serve as a counterweight to Clinton’s AFSCME endorsement, which she obtained in late October. The American Federation of State County and Municipal Employees is another labor powerhouse. By going with Obama, the SEIU and UCFW ensure that Clinton will not have a monopoly on major labor endorsements.

In its endorsement, the UFCW says: “We have the utmost respect for Senator Clinton and her tireless efforts on behalf of working people. And while both Senators Hillary Clinton and Barack Obama have a vision to change America, we believe that Senator Obama is the best candidate to build a movement to unite our country that will deliver the type of change that is needed – for good jobs, affordable health care, retirement security and worker safety.”

Will that movement of Obama’s be able to deliver the nomination? We’ll see, but these two big endorsements can’t hurt.