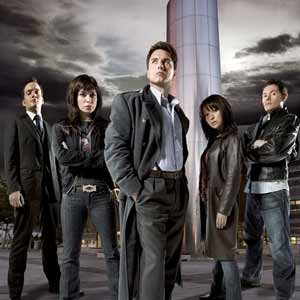 The BBC hit series Torchwood is a spin-off of a spin-off, really: an extension of the new Doctor Who series that is itself only vaguely related to the classic long-running original. Torchwood‘s creators were apparently inspired by the still-underappreciated Buffy the Vampire Slayer, a show that used elements of fantasy as illustrations of (and counterpoints to) the characters’ lives, and on the surface, the shows have a lot in common: Doctor Who attracted fans as much for its winking humor as its geeky sci-fi, and on Buffy, the satire was built in.

Torchwood has also followed in Buffy‘s footsteps in another way: towards the end of the latter show’s run, two of the female characters fell in love, and their relationship evolved into the most fully-realized same-sex couple on television at the time. In Torchwood, a secretive X-Files-type agency is led by a mysterious (and apparently immortal) guy named Captain Jack Harkness, and he’s typically courageous and handsome. He also appears to be gay, or at least bi: his romantic entanglements are with men, whether it’s the cute office guy or the interstellar co-conspirator.

Having a stereotype-defying gay lead in a series is definitely ground-breaking (even if it is the BBC), and out actor John Barrowman, who portrays Harkness, has become an outspoken advocate of gay causes, and a minor celebrity, in England. But is it a good show? Part of what made Buffy so compelling was the character development, perfectly calibrated to draw us in and then surprise us. While Torchwood has just started its second season, it seems impatient to have it all at once, loading the characters up with drama before we really know who they are. An early episode featured Captain Jack’s office love interest betraying everybody at the agency just to help revive a secret robot girlfriend, yet by the next week all seemed to have been forgotten.

If you followed that last sentence, you’ll see that actually most of the show’s characters evidence bisexuality. In the second episode, a young woman is infected with an alien being that feeds on sexual energy, and both the male and female characters can’t help but have a “snog” with her. (Star Trek famously used the alien-taking-over-a-body queer metaphor at least once as well). In fact, “gay” identity isn’t really referred to at all in the show, and same-sex hooking-up is treated as matter-of-factly as opposite-sex. It’s refreshing, and according to Kinsey, probably closer to the real truth about human sexuality than our current “Queer Eye”-influenced cultural norms. But, honestly, it seems like a bit too much of a leap forward, its vision of a post-sexual-identity world (or, at least, Cardiff) a little unrealistic. On top of that, Jack and the show’s female lead, Gwen, appear to have a smoldering attraction for each other, which could turn out to be the show’s “Moonlighting”-style central unrequited love relationship, pushing the queer relationships to the margins.

Maybe I’m being too rough on the show’s philosophical underpinnings, when it’s just supposed to be a bit of campy, B-movie fun. I’ll admit, as well, that Captain Jack’s makeouts with a WWII-era soldier and a former fling (played by James Marsters, Spike from Buffy, natch) were incredibly hot. Cute guys, spooky aliens, what’s not to love, right? And it’s easy to forget that the eventually-superb Star Trek: The Next Generation started out awkward and laughable in its first season. But if someone as tolerant for corny sci-fi as me finds himself rolling his eyes at the incredibly silly twists and turns on this show, you know it’s got to be stretching it a little thin, and if nobody cares about your characters, they won’t care if they’re breaking down the boundaries of on-screen sexuality. Nevertheless, Torchwood is a show to keep your eye on.

Update: Hey, YouTube, you’ve got everything, don’t you? Watch the Barrowman-Marsters makeout scene below. By the way, why Spike is dressed up like Adam Ant, I have no idea.