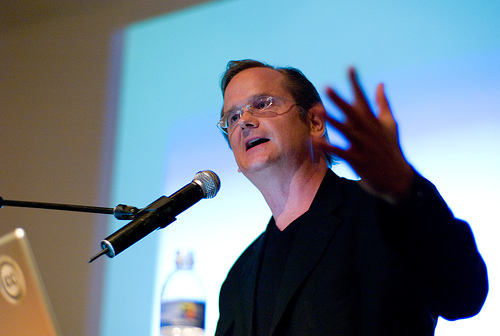 That’s how Stanford Law Professor and Creative Commons founder Larry Lessig described the U.S. Congress at an event at the National Press Club today where he alleged that Congress “is driven by interests that ought not to be driving it.” Lessig is far from the first person to bemoan the influence of money in Washington politics, and he acknowledged as much in his lecture. But he is offering a new, well-thought-out way of tackling a problem that he says causes government to consistently make the wrong decision in “easy cases,” where the proper course of action is obvious. (Lessig pointed to copyright terms, nutrition guidelines, and global warming as three examples of “easy cases” Congress gets wrong).

Lessig’s new group, “Change Congress“, will try to “leverage and amplify” the work of the existing government reform movement. Run by Lessig and Howard Dean/John Edwards campaign manager Joe Trippi, Change Congress will use an internet-centered model similar to that of the incredibly successful Creative Commons project Lessig founded in 2001. (Creative Commons uses the internet to give artists and content creators an easy way to clarify how they want copyright to apply to their works. And it’s how MotherJones.com and websites can license so many great flickr.com photos for free.)

The first element of the Change Congress initiative is a pledge, which individuals and congressional candidates can choose to support in full or in part. The pledge has four components: 1) Rejecting money from lobbyists and PACs, 2) Voting to permanently ban earmarks, 3) Supporting public financing of political campaigns, and 4) Supporting “total Congressional transparency.”

The second part of the initiative involves tracking support. Change Congress will keep a registry of citizens who believe in its goals, much as Creative Commons keeps a registry of Creative-Commons-licensed work. Change Congress will use the citizens’ registry to demonstrate the support government reform enjoys in each congressional district. Just as importantly, it will track which members of Congress (and challengers) support reform, and which representatives are the most beholden to PACs and lobbyists. Representatives who have pledged support and those who have actually taken action to support reform will also be tracked.

So how will Lessig and his organization get members of Congress excited about his project? He’s thought about that, too. That’s why the third part of Change Congress (there could be more parts after this early, “beta” phase is complete) is centered on actually funding reform. Change Congress will provide tools for individuals who want to give money to members of Congress who support reform, thus replacing the cash the MoCs could have received from PACs and lobbyists, and in return for handing out earmarks.

More than anything, Lessig’s lecture highlighted why he could be an important force for change in this arena. It’s not that his general ideas are incredibly new. It’s that he does a great job of explaining them in a simple, clear way, and that he comes up with great examples to prove his points. Corruption, he told the crowd at the National Press Club today, is like alcoholism. An alcoholic has all sorts of terrible problems she has to deal with because of her addiction: potential loss of a job, alienation of family, jeopardizing of health. Just as an alcoholic can’t deal with her other problems until first she solves her alcoholism, so too will Congress be unable to get the “easy cases” right until it solves its corruption problem. And for a nation that needs to get on the government-reform wagon, Lessig’s Change Congress hopes to be AA.