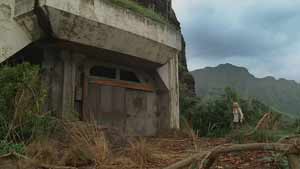 While last week’s episode was a surprisingly affecting reminder of how emotionally powerful this show can be, even when you have very little idea of what the hell is going on, last night’s episode was more about giving us edge-of-our-seats suspense while, uh, having no idea what the hell is going on. Plus, you know, a quick blowing of all the semiotics majors’ minds with the line “It’s very stressful being an Other.” Tell me about it!

Actually, we did get some interesting back story on Juliet, whose relationship with Ben turns out to be even creepier than we thought. Juliet’s dalliance with Goodwin basically got him killed, as a madly jealous Ben sent him off to his demise. Turns out Juliet looked just like Ben’s… 3rd grade teacher? Just a guess. So, that explains how Juliet went from angelic Lifetime-TV-special “I’m just trying to save the mothers” doctor lady into manipulative Other. It happens to the best of us.

Back in “the present,” bumbly Faraday and grumpy Charlotte head off to The Tempest, a power station-slash-extermination center, on a random mission to either gas everybody on the island or not. Kate stumbles onto them, looking for all the world like she just had 3 or 4 margaritas. For God’s sake, Kate, if you’re that suspicious of what they’re up to, maybe don’t turn your back to Charlotte so she can bonk you in the head? Whoops, too late! And seriously, why won’t anybody on this show just explain what they’re doing? “Well, Kate, there’s a power station full of poison gas just up the trail, and we want to render it inert to save your sorry asses from psycho Ben.” How hard is that? Apparently harder than a head-bonk.

Just in case you didn’t catch the VALIS reference from last week, here’s a 30-second close-up shot of the book again. Philip K. Dick everybody! Unfortunately, VALIS is the one PKD novel I was never able to slog through; I’ve read every one of his short stories like 10 times, but VALIS‘ “it could be real or I could be crazy” back-and-forth kind of gives me a headache… just like Locke and Ben, whose cat-and-mouse games are getting on my nerves. But, thanks to a video Ben shows us, we learn the freighter really is Widmore’s, as the Riff speculated last week, although what Richie McMoneybags wants with the island is anybody’s guess. (Condos? In this market? “Bchfrnt vus, scry smke mnstr.”) And, gulp, if he’s a baddy then Faraday and Charlotte are his baddy minions, right?

So, I have no idea who the good guys or the bad guys are, but for God’s sake, we better turn off (or on) the gas computer data system before the bar goes any higher into the red and kills us all (or saves us all)! Hey, Shakespeare wrote something called The Tempest, didn’t he, maybe he can help:

All torment, trouble, wonder and amazement
Inhabits here. Some heavenly power guide us
Out of this fearful country!

You said it, Will.