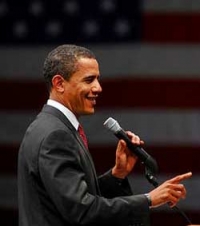 One of the fundamentals of Barack Obama’s foreign policy pitch—and one of those rare areas of real disagreement between him and Hillary—is that he is willing to meet with the leaders of all nations. As his Web site puts it, “[Obama] will do the careful preparation necessary, but will signal that America is ready to come to the table, and that he is willing to lead.” On this position, which he applies to even such official boogeymen as Raul Castro and Mahmoud Ahmadinejad, Obama likes to quote JFK’s line that “We should never negotiate out of fear, but we should never fear to negotiate.”

That Obama has vigorously defended his pro-negotiations posture, even in the face of criticism that will no doubt intensify if he is the nominee, makes the senator’s response to a question about whether he favors negotiations with Hamas particularly striking. From an event for Jewish leaders in Cleveland last week:

The answer is no and the distinction would be that Hamas is represented in the Palestinian legislature, or it was before the current rift, but they’re not the head of state. They are not a recognized government. So I think there is a distinction to be drawn there and a legitimate distinction to be drawn. …[A]nd the point is that with respect to Hamas, you can’t have a conversation with somebody who doesn’t think you should be on the other side of the table. At the point where they recognize Israel and its right to exist, at the point where they recognize that they are not going to be able to shove their worldview down the throats of others but are going to have to sit down and negotiate without resort to violence, then I think that will be a different circumstance.

Of course Obama’s answer disregards, among other things, the fact that Hamas is not a recognized government in part because of a boycott by the United States (despite Hamas’ clear majority in the 2006 parliamentary elections and current control of Gaza). There are also the repeated offers by Hamas for a cease-fire with Israel. The answer represents a clear departure from Obama’s credo of talking to anyone, friend or foe—Hamas is somehow beyond the pale, while an Ahmadinejad or a Castro is acceptable.

Tellingly, as Laura reported earlier, there is growing support in Israeli officialdom for some form of negotiation with Hamas. And then there’s this: Haaretz released a poll last week showing that 64 percent of Israelis favor direct negotiations with Hamas. So why is the most liberal presidential candidate in America taking a harder line than the Israeli citizenry? Nothing new here, just a continuation of Obama’s Israel shuffle.