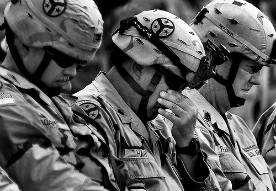 Bolstered by General Petraeus and Ambassador Crocker’s assurances that progress is being made in Iraq, if a bit slower than they’d like, President Bush this morning announced that he plans to cut Army combat tours from the current 15 months to 12 months, restoring the pre-surge pace of deployments. The President also officially embraced Petraeus’ recommendation that the Pentagon freeze troop levels at 140,000 this July, pending “a 45-day period of consolidation and evaluation,” followed by “a process of assessment” before any further withdrawals take place. The strategy will effectively end the recent build-up of troops, returning the U.S. military’s Iraq posture to what it was in January 2007, before the surge began.

The move to reduce the duration of combat tours enjoys the support of Bush’s supporters and critics alike. Questions remain, however, about how the new 12-months tours will be implemented in practice and whether they will be sufficient to help the Army recover from the intense strain of its recent Iraq experience. Both the Army and the Marine Corps, the services bearing the brunt of the fighting in Iraq, have complained that the pace of deployment has severely undercut their overall readiness and, particularly in the case of the Army, may even threaten the future of the all-volunteer force. Following on his recent appearance on the Senate side, General Richard Cody, the Army’s outgoing vice chief of staff, testified yesterday afternoon (.pdf) before the House Armed Services Committee, where he repeated his warning that the Army is “out of balance” and the current demand for its forces “exceeds the sustainable supply.”

Cody’s concerns may not be eased by today’s decision to return to 12-month tours. According to the Washington Post:

Bush’s decision will affect only those troops sent to Iraq as of Aug. 1 or later, meaning that those already there still have to complete 15-month tours. Bobby Muller, president of Veterans for America, an advocacy group, said that nearly half of the Army’s active-duty frontline units are currently deployed for 15 months, and that Bush’s decision leaves them out.

“In short, this is a hollow announcement; it has no immediate effect,” Muller said. “It is nothing more than political posturing at the expense of our troops. Our soldiers are unraveling and they need their commander in chief to provide immediate relief.”

House Armed Services Chairman Ike Skelton (D-Mo.) applauded Bush’s move. “But it only resets us to where we were last winter,” he added. “This pace will still wear our troops out.” Ilan Goldenberg, a scholar at the National Security Network, said on a conference call organized by antiwar activists that Bush cannot portray the move as a sign of progress. “The military is so strained, the president really didn’t have a choice,” he said.

Cody earlier testified to the Senate that, in order to maintain the Army’s readiness, tour cycles of 12 months on, 12 months off (like the one Bush announced this morning) would likely not be enough. “Where we need to be with this force is no more than 12 months on the ground and 24 months back,” he said, an unlikely proposition given Petraeus’ recommendation that troop withdrawals be indefinitely suspended in July. Be that as it may, Cody is not alone in sounding the alarm. The National Security Network, in advance of this morning’s press conference at the White House, compiled a list of warnings from senior military leaders about the negative impact of Iraq deployments on the nation’s armed forces. Read it here.

Photo used under a Creative Commons license from klika100.