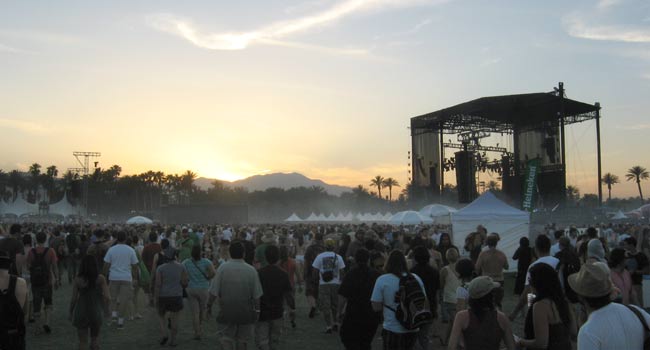 Greetings from the desert and day three of the Coachella Festival. In tonight’s edition: Canadians! Germans! More Canadians! And oh yeah: Flying inflatable pigs that apparently endorse Obama! While I’m doing my best to be the intrepid reporter on the scene, my coverage is devolving day-by-day: crappy photos on day one, late-night spelling errors on day two, and today, I forgot my note-taking pen, so all this is coming out of my sun-baked memory. Perhaps I imagined the whole thing? 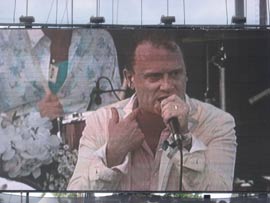 Our late exit from last night’s triumvirate of awesomeness meant we lacked motivation today, relaxing poolside until well in the afternoon. Unfortunately this meant missing some interesting acts like Cool Kids, Duffy, and Deadmau5—sorry, hipster hip-hop, Brit blues, and techno fans. But we did arrive in time to catch Montreal combo Stars (left) on the main stage. Part of the Broken Social Scene family of products, the band make lushly-arranged indie rock with an epic scope, and while some of their louder moments seemed a little too loud for 4:30 in the afternoon, by their finale, “Take Me to the Riot,” they’d brought the crowd up to their level. 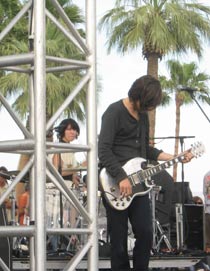 Next it’s over to a side stage for Autolux (right), the LA band who have kind of picked up where My Bloody Valentine left off. Unfortunately, their new material seems even more noisy and extreme than their great 2004 album Future Perfect, and the performance is kind of scattershot. Mostly it’s the mix: their fantastic drummer, Carla Azar, whose jazzy syncopation holds the band down to earth, is barely audible. This used to be one of my favorite live bands, but lately, they seem fragile and confused. 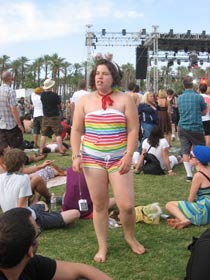 Fashion Alert: Fluorescent colors are multiplying daily, and just about everywhere I look, somebody’s got hot pink sunglasses or a T-shirt with shocking-orange print. I swear to God, I even saw a Frankie Say Relax shirt. Of course there are the people who take the “festival” aspect even more seriously, trying to add their own bit of eccentricity to the event: behind us, a group of glassy-eyed teens are painting each others’ bodies with gloppy tempera paint, and then we spot Rainbow Bunny Girl (left), who deserves either an award or a bill for the therapy I’m going to need after seeing this. 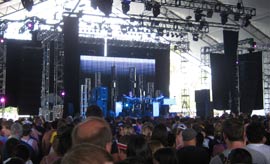 Anyway, all these bright colors have put us in the mood for some German techno, and there are few better producers of it than Booka Shade (right). The duo are actually performing live (not just DJing), with one guy on percussion and one guy on “bank of computers,” but the sound shifts around in ways that make it clear some sort of live performance is really happening, and the crowd responds accordingly. It helps that at heart Booka Shade are incredible songwriters, relying on original, dramatic melodic turns rather than typical “cheap” electro breakdowns to inspire the audience, and their sound is crisp and clear. They finish with “Body Language,” a song whose straightforward, mathematically precise bassline seems like it emerged from humanity’s genetic memory. 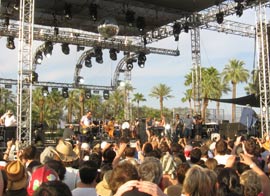 Back on the side stage, it’s time for Metric (left), another Canadian combo, whose rock intensity is leavened by keyboardist/vocalist Emily Haines, as charming and energetic a band leader as you could hope for. Their 2007 Coachella appearance was a highlight, as they treated a broken bass string as an opportunity for an extended, thrilling jam; this year, they have even more technical trouble, with the keyboard and a guitar pedal giving out. It doesn’t faze them, but it’s a little less charming this time, and their performance is accomplished, not transcendent. But their Kim Wilde-y track “Monster Hospital,” with its refrain of “I fought the war/but the war won,” is an explosive finale.

I didn’t see this, but at this very moment, apparently Sean Penn, the actor guy, is on the main stage, asking for volunteers to head to New Orleans tomorrow for a rebuilding program of some sort. What? Like, leave our rental cars in the parking lot and just give up our jobs and go hang out with Sean Penn? Weird. I’m going to say “no thanks.”

We stumble over to the silly VIP corral, which I have to explain isn’t really VIP in any way, but it’s got better food stands than what the regular people eat. Ha, take that, normals.

We get some sushi and then head out to the lawn for Roger Waters. At this point, I have to abdicate to my buddy Miles, since I’ve never really liked Pink Floyd and don’t have any way to judge. “It was a replica of every show I’ve seen him do on this tour,” he says, “but it’s amazing. It sounds exactly like Pink Floyd, and it’s all pretty much from the classic era, all the way to The Wall.” I’m game, but last only four or five songs before I wander off to the dance tent for Simian Mobile Disco, who command a table full of equipment, twisting their hits into pure machine noise, like a robotic Sonic Youth. 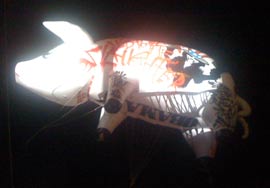 When I emerge, I see off in the distance that something big is rising into the air from the main stage area. Turns out it’s an inflatable pig, released during the song “Sheep.” Miles reports that people were leading the pig balloon (complete with Obama endorsement on its underside) through the crowd like a Macy’s Parade balloon, bringing it in front of the stage. Then, conflicting reports say that perhaps pyrotechnics from the stage singed the pig’s tail, also breaking its tethers, or maybe the handlers just let go. Either way, Megapiggy was released it to the heavens to spread his message of Obama support to passing flights into LAX. Waters’ reaction was just to pronounce, like a proud father, “That’s my pig!”

We exit the arena to the strains of “Comfortably Numb,” and I’m trying not to judge, but it seems just a little incongruous for a festival based on new sounds. But whatever. Overall, the standout performances on Saturday night have made this, the festival’s ninth installment, one that will be remembered for the quality of the included artists, as much as for the re-emergence of fluorescent fashions. It’s been an epic three days (and we could use a vacation to recover from our vacation) but Coachella continues to set the standard for American festivals, a well-produced venue for challenging live music that manages to actually bring in an audience. See you all next year, with, say, U2 headlining? (Just an idea…)