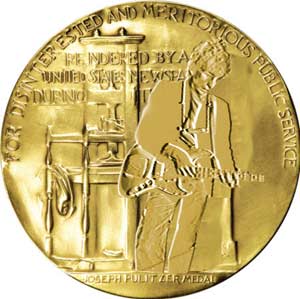 Thanks to Bob Dylan, rock ‘n’ roll has finally broken through the Pulitzer wall. Dylan, the most acclaimed and influential songwriter of the past half century, who more than anyone brought rock from the streets to the lecture hall, received an honorary Pulitzer Prize on Monday, cited for his “profound impact on popular music and American culture, marked by lyrical compositions of extraordinary poetic power.” It was the first time Pulitzer judges, who have long favored classical music, and, more recently, jazz, awarded an art form once dismissed as barbaric, even subversive.
– AP

Hip-hop has finally broken the boundaries of time and space, as the Nobel Foundation announced today that Snoop Dogg would be awarded the Nobel Prize in Physics. Gunnar Öquist, Secretary General of the Royal Swedish Academy of Sciences, presented Snoop with the prize in a ceremony in Stockholm, citing the rapper’s “inquisitive lyrical themes concerning the behaviors of liquids (‘Gin and Juice’) and gases (‘Chronic Break’),” as well as his “hebetudinous delivery which has been proven to alter the listener’s perception of time.” Snoop pronounced the medal “fly.”

Back in the States, in a move that has been anticipated for weeks, Miley Cyrus was awarded a MacArthur Genius Grant for her work as Miley Stewart/Hannah Montana. The MacArthur foundation heaped praise on the singer for her contributions to “the advancement of syncretic metafiction,” describing the singer, real name Destiny Hope Cyrus, as a “a web of multiple identities, the first true post-human creation of the digital age.” Cyrus reacted to the news by hugging her dog and thanking her role model Hillary Duff, who won the Pritzker in 2007.

In related news, it was screaming mayhem at the Nickelodeon Kids’ Choice awards last week as host Jack Black presented Richard Dawkins with the award for “Favorite Male Evolutionary Biologist.” “Up yours, Gouldy,” he exclaimed, referring to the writer Steven Jay Gould, who had famously been nominated 14 times for the award, yet never won. Attendee Tiffany Wright, 11, clutching a tear-stained copy of The God Delusion, told reporters she had actually touched the writer’s tweed jacket. “Religion is the opiate of the masses,” she exclaimed, “Ricky is totally my idol!”