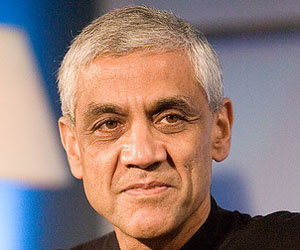 Photo used under a Creative Commons license by flickr user <a href="http://www.flickr.com/photos/x180/">duncandavidson</a>

Mother Jones: What role does entrepreneurship play in environmental change?

Vinod Khosla: A vital one. Entrepreneurs have the flexibility and the ability to do things that large companies simply cannot. Could a large company pull off a trick like Amyris, going from anti-malaria medicine to next-generation fuel? Entrepreneurs and scientists can foster innovation in a small company environment in a way that simply cannot be replicated in an underfunded R&D division somewhere in some behemoth’s bowels. Startups allow technologists and scientists to take risks and change plans in a way that would be frowned upon in a big company. Having said that, big companies will play a key role in certain areas and in partnerships with little companies. Each has its strengths.

MJ: How can the economy and its drivers be used to the advantage of sustainability and innovation?

VK: The climate change issue is a problem today—an economy that realizes this and works toward solutions will benefit immensely from it. From our perspective, are we better off being dependent on the Middle East today? Growth is vital—sustainable growth far more so. For example, China’s growth rate is impressive, but they’re giving back a big chunk of that in environmental damage. Is that sustainable in the long run? If these sustainable technologies allow a point of entry for innovation, which is essentially absent in the current energy infrastructure, and create new competition for fossils, I believe in the end we will pay less for green and for fossil than the current trajectory we’re on.

MJ: You were an early supporter of ethanol. Still see it as the future?

VK: Absolutely. As with any new tech, there will be failures, but we think cellulosic ethanol is still capable of being a material difference maker in oil usage. And 50 years from now, it may be replaced by something else. That’s the great thing about technology—change never changes. My calculations show that with almost no land we can replace almost all our gasoline at $1.00 per gallon in production cost! We just have to stop extrapolating the past. Using corn ethanol to compute the future is like saying if we rely completely on wind power, renewable power generation will result in 75 percent of the people being without power 75 percent of the time. Food-based biofuels don’t have much of a future, but cellulosic is the only viable scalable solution in the near term.

VK: For electric power generation, we are very optimistic about solar-thermal technology, and we’re intrigued by the potential of enhanced geothermal energy to replace coal-based power generation. Traditional carbon capture and sequestration-based coal power generation is somewhat unlikely to be competitive, but I do believe radical new solutions not being discussed today will emerge.

MJ: What’s the most overhyped?

VK: Hydrogen is up there. Where’s the infrastructure?

MJ: What is the biggest impediment to the development of new energy?

VK: Entrenched interests, and the same flat-earthers we’ve seen throughout history. Criticism is perfectly reasonable, but I’m reminded of Arthur C. Clarke’s quip that any revolutionary tech goes through 3 stages: “It’s completely impossible—don’t waste my time”; “it’s possible, but it’s not worth doing”; and “I said it was a good idea all along.”

MJ: What is the one policy change that would go the furthest toward cutting fuel consumption in the U.S.?

VK: A carbon tax. Simply put, quantifying negative externalities in terms people would understand would do wonder towards revealing the true cost of oil.

MJ: You wrote a paper recently on the good and the bad of hybrids. What’s your advice to consumers considering them?

VK: It should be noted that I think serial hybrids have a definite future, especially in combination with cellulosic biofuels. But they will be expensive and will not penetrate 50 percent of the new-car market worldwide anytime soon. We need a low-carbon technology to at least reach 50 to 80 percent of new-car sales, so it must be impactful. I don’t think its my place to change consumer preferences—but I would point out that they should be aware of the economics of the decision. We think hybrids can be a stepping-stone, and 50 years from now, the fleet may be all electric, but we don’t see them as a solution by themselves.

MJ: What about companies investing in their technology?

VK: As for companies invested in the space—I think its important to distinguish between a good investment and a material climate change technology—you can have the first without the second, even in the “clean tech” space. We are actively investing in hybrid batteries.

MJ: When will we see the last gasoline-powered Hummer?

VK: What if the gasoline was renewable and made from biomass? What if it had negative carbon emissions and the more we drove the less carbon we would have? Don’t restrict the solution space through conventional thinking.

MJ: In another recent paper, you say, “Most of our biofuel needs can be met with fairly limited land usage.” This is contrary to what recent studies have shown. Can you explain how we can meet our biofuel needs without risking major deforestation?

VK: I think there has been a trend toward sensationalism. Will biofuel usage require land? Absolutely, but we think the ability to use winter cover crops, degraded land, as well as using sources such as organic waste, sewage, and forest waste means that actual land usage will be limited. Just these sources can replace most of our imported oil by 2030 without touching new land. Combined with continual progress in yields and genetic engineering toward growing more energy-intensive crops, and recovering much of the land currently used for corn ethanol, the net land use is reasonable.

MJ: If you had $1 million, where would you invest it?

VK: I think a genuine battery/storage breakthrough has huge applications.

MJ: What would it take for renewable energy to go mainstream?

VK: I think all the remaining presidential candidates have committed to the idea of some sort of carbon-taxation scheme, which attempts to quantify the real cost of fossil fuels (although not all of them). Setting an aggressive enough carbon-reduction goal will result in an appropriate price for carbon and will help many a renewable technology. Consumer education will help. Most importantly, though, will be the continually declining cost trajectory of the real breakthrough in clean-technology costs driven by research and innovation. In the end, private capital is the real barometer of change.

MJ: Would you rather live next to a nuclear power plant or a coal burning plant?

VK: Nuclear, and it’s not even close. Letting the perfect be the enemy of the good is one of the reasons we have a coal-dependent infrastructure, with the resulting environmental impact that all of us can see. I suspect environmentalists, through their opposition of nuclear power, have caused more coal plants to be built than anybody. And those coal plants have emitted more radioactive material from the coal than any nuclear accident would have.