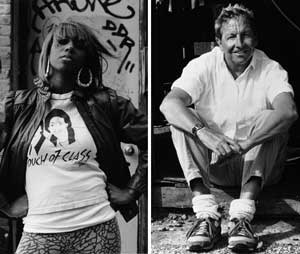 Didn’t we have a seminar or something to take care of all that? In politics, things seem to be looking up: An African-American has all but wrapped up the Democratic presidential nomination and the California Supreme Court just decided they wanted in on the gay marriage economic boom. But over on the arts and culture pages, where you’d think people would be a little ahead of the game, homophobia and racism are still rearing their ugly heads, in subtle but egregious ways. At issue: can black singers ever avoid being classified under “hip-hop,” and when is it okay to posthumously refer to someone as “gay”?

Philadelphia-born (and African-American) singer Santogold (above left, real name Santi White) is one of the hottest new artists of the year, receiving overwhelming blog attention for her early singles and capacity crowds at her live shows. Her first two songs both landed in my Top Tens here on the Riff last fall, and her self-titled debut album was just released to near–universal acclaim. However, some critics and retailers are unsure what section of the store to put it in. While the sound of the album varies between Yeah Yeah Yeahs-style rock and throbbing, noisy dancehall, The Lipster reports that three of the five online music retailers in the UK have categorized it under “hip-hop/rap.” White’s calling them out, saying “it’s totally racist.” Come on, Santi, our racist genre designations are all we have! I mean, sure, the ability to pinpoint what makes something “rock” and what makes something “hip-hop” without looking at the color of the skin of the performers pretty much dissolves under close scrutiny, just like, it turns out, telling the difference between red and white wine. But when I’m surfing around iTunes, it’s vital to me that Timbaland’s work for white artists is classified under “pop” while his own album is shelved with “hip-hop/rap.” How else are we supposed to find anything?

Okay, just kidding. On the homophobia side, Towleroad picks up blogger Tyler Green’s observation that coverage of artist Robert Rauschenberg’s death last week almost completely neglected to mention that the artist was gay. The Times only referenced the subject obliquely, with a wink at the “intimacy” of his relationship to Jasper Johns, and in one case an obit explicitly referenced a collaboration with Rauschenberg’s wife from 1950-53 Susan Weill, giving her most of the credit for this “genuine” work while calling most of Rauschenberg’s work a “joke.” Why should we care? Well, as Green puts it:

This is a problem for two reasons: Rauschenberg frequently referenced his homosexuality in groundbreaking ways in his own work (much of which was autobiographical and even more of which was intensely about the then-immediate present), and because history tends to hetero-wash whenever possible, to ignore or deny homosexuality when it’s convenient. … I also think it’s important to place Rauschenberg within the context of one of the great under-examined migrations in American history: That of gays and lesbians from rural America to cities in the decade after World War II, and the immense changes in American culture that migration helped kick off. Furthermore: While many obits mentioned that John Cage, Merce Cunningham, Johns, and Rauschenberg partnered to re-create whole disciplines, few mentioned that all four were gay, and how that commonality informed and enabled their practices and their friendship.

It’s understandable, often, that gay history can be “erased” (just as Rauschenberg himself famously erased a de Kooning) considering that only heterosexual relationships could possibly have any “official” records back in the ’50s. But when even Wikipedia straightforwardly notes romantic relationships with Cy Twombly, and Johns, one wonders why the Times couldn’t find a reliable source maybe? These days, when it sometimes seems like the love that dare not speak its name won’t ever shut up, it’s a sad reminder of how far we have yet to go.