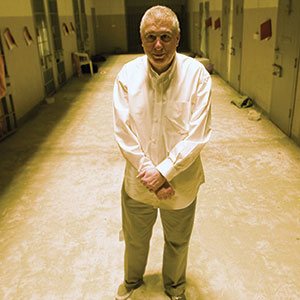 
In his new film, Standard Operating Procedure, Errol Morris turns his camera on Abu Ghraib. Employing the investigative and cinematic techniques he’s honed in The Thin Blue Line and The Fog of War, the Oscar-winning filmmaker introduces new layers of visual and moral complexity to the scandal. The result, even four years after the prisoner abuse was uncovered, is revelatory. (The film is accompanied by a book of the same title coauthored by Philip Gourevitch.) Morris landed interviews with most of what he calls the “perverse band of brothers”—the soldiers who snapped and appeared in the iconic images, including Lynndie England. Yet the biggest surprise is Sabrina Harman, best known for flashing a thumbs-up while posing with the corpse of Manadel al-Jamadi, a prisoner killed in cia custody. She emerges as an all-American girl who got caught up in horribly un-American activities. “Sabrina is not a monster,” says Morris. This refusal to pigeonhole his subjects has already earned him some controversy. The 60-year-old director took a break from his busy career, which includes blogging for the New York Times and directing TV ads, to talk.

Mother Jones: You’ve written on your blog that “It is easy to confuse photographs with reality.” What reality surrounding the Abu Ghraib photos did you want to challenge?

Errol Morris: The photographs served as both an exposé and cover-up. They’re probably some of the best-known photographs of all time. And people framed views of these photographs without knowing anything more than what they just saw in the photographs themselves, as if the photographs were self-explanatory. I just don’t believe it works that way.

MJ: Are there specific interpretations of the photos that you see as misguided?

EM: Both the left and the right failed to look further than the photographs. For the left, the photos are the unmistakable fingerprints of Rumsfeld, Cheney, and Bush. For the right, it’s these bad actors who acted on their own. Both interpretations fail to look beyond the photographs themselves to the reality of that place.

MJ: Do you ever consider the guards, considering that they were living in cells, being shelled daily, and bored out of their minds, prisoners of this situation as well?

EM: They themselves saw themselves as prisoners of this situation. They weren’t prisoners in the same way, but yes, they were prisoners. Everybody was in fact trapped there. Trapped in different ways, different degrees of being trapped, but trapped. Trapped by a war that made very little sense that was prosecuted in a way that was confused and out of control, and devolved into nightmare.

MJ: Seeing the photos, do you ever think, “Thank God for digital cameras”?

EM: Yes, I do. Sabrina Harman, under another set of circumstances, would be given a Pulitzer. Our knowledge of the murder of al-Jamadi derives from the photographs she took of his corpse. She remarks in the movie that the only reason she wasn’t prosecuted for the photographs was that they didn’t want to draw additional attention to the fact that a murder had occurred.

MJ: Harman’s pictures were clearly taken by someone who felt comfortable—they have this college-dorm feel to them. And yet, she says she was motivated by a sense of revulsion. Do you think these two impulses existed at the same time?

EM: Yes. I think there’s this desire to explain human behavior in terms of the one reason why it happened, when in fact there may be multiple reasons, and it may be incredibly complex.

MJ: Does that complexity diminish the moral clarity of the situation?

EM: I think it goes so much deeper than that, and into the nature of this war. I think sexual humiliation is at the center of this war. Here’s one of the really perverse oddities: You have a war that’s based on sexual humiliation and someone takes a picture of an Iraqi male being humiliated by an American female. The picture is released and humiliates the government, so they seek to humiliate the people who took the picture by putting them in jail and blaming the failure of the entire war effort on them. If some evil genie on high were to concoct an utterly perverse, depraved world, he could do no better.

In 2004, Errol Morris made dozens of brilliantly simple pro-Kerry, anti-Bush TV spots for MoveOn.org. What happened next was a lesson in why political consultants suck. As Morris explains, “I make my money doing branding, marketing, and advertising. That’s my bread and butter. The one intuition that I had was that ads that preach to the choir are not going to achieve anything. The only chance anyone had was appealing to people in the middle. I had done all these ‘Switch’ ads for Apple. And I said, ‘Let’s just do “Switch” ads! Let’s interview people who voted for Bush in 2000 but can’t bring themselves to vote for him in 2004.’ I did about 50 ads.” MoveOn aired only a few. Morris also approached the big boys: “I wanted to work for the dnc, the Kerry campaign—nothing worked. I really wanted to put Kerry on. I thought, ‘Here you have a person who seems robotic and wooden; I could make him less so. In fact, I think I could turn him back into a person. Give him to me for a couple of hours.’ But it never happened. That experience was so horrible.”

MJ: Lynndie England talks about the photos of her with the guy on the leash. Most people saw her dragging him across the floor; she says that’s not what really happened. Do you believe her?

EM: Yes. She’s five feet tall. She probably weighed 95 pounds at the time. I just don’t see her dragging Iraqis around on leashes. There is something about the photographs that is endlessly disturbing. The fact that we like to think of them as torture actually hides what is really deeply offensive about them.

MJ: So do you think questions like whether she’s pulling him are distractions from the larger issue?

EM: No, I don’t. I think they’re the essence of the larger issue, oddly enough. When I look at that photograph, there is something deeply mysterious about it to me. Is this a picture of torture? If it’s a picture of something else, what is it? What Lynndie is telling you is that scene of “Gus” on the leash was something created so someone could take a picture of it. And in taking a picture of it they were illustrating something about this war involving an American male soldier and his female American soldier girlfriend humiliating, dominating an Iraqi male. We could talk about this endlessly.

MJ: You rebuilt part of Abu Ghraib for the movie. What was it like to work inside a recreation of the prison?

MJ: And filling in some of the gaps?

EM: I don’t think it’s filling in gaps. Filling in gaps means I know how to fill in gaps, which I don’t necessarily know how to do. But I can lay out the story in a way where people are forced to think about it in a different way.

MJ: How did you get Lynndie England to talk to you?

EM: With enormous difficulty. It’s true of everybody. I would say the hardest interview to get was [CACI contractor/interrogator] Tim Dugan. The fact that Tim ever did talk to me is utterly amazing. But that’s part of what I do; I get people to talk to me.

MJ: Do you see a common thread running between the guards and Robert McNamara in The Fog of War?

EM: On one hand, you have this guy at the absolute top of the pyramid, and on the other hand you have people at the very bottom of the pyramid, put in this very strange, morally compromised setting. I hear these criticisms [of the film]: “You were supposed to address the chain of command; you were supposed to find the link to Rumsfeld and Cheney!” In Heart of Darkness, you don’t hear a phone call between King Leopold and Kurtz where King Leopold says, “You have to treat the natives like dogs.”

MJ: I read that you ran into Karl Rove and he told you The Fog of War is one of his favorite films. Do you think that just confirms what you’ve said about people seeing what they want to believe?

EM: I do. We’re so used to thinking of the people who involved us in this war as beyond the pale that we can’t even imagine their motivation. Karl Rove liked the movie, clearly. He said he gave it to his friends.

EM: I think it’s in combination with me as an interviewer. I do think that the whole technique of creating a situation where people are talking to another person instead of talking to a camera and at the same time looking directly into the lens is valuable.

MJ: Has anyone else used the device?

EM: I know that people are starting to use it more and more. It’s weird to me that it hasn’t happened more quickly. I lost the opportunity to patent it. I never even thought I should patent it; I’m just stupid, I suppose.

MJ: As someone who spends so much time thinking about how to get people to talk to you, do you ever think about how so much of what happened at Abu Ghraib was under the guise of getting people to talk?

EM: It’s really funny. When I first met Tim Dugan, he asked me, “How many people have you interrogated?” And I said, “I’ve never really interrogated anybody; I interview people. I try to create a situation where people will talk to me, but I’ve never looked at myself as an interrogator.” And he said, “Well, how many people have you broken?” [Laughs.] If you thought rationally about what I do, you would say it’s impossible. If you said, “You’ll put people in a studio and interview them with a film crew present and expect to hear stuff that you’ve never heard before—could such a thing work?” The answer is, Yes! Is it self-evident? No.