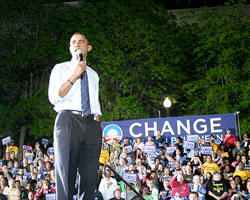 Reflect for a moment on how serendipitous it is that Barack Obama is where he is today. As a 46-year-old half-black presidential candidate who was a newcomer to Washington and a believer in transparency and government reform, Obama’s only natural message was one of change. He and his advisers decided not to modulate or moderate that message: every sign at every stop had a single word in bold type: “Change.” The full sentence may have been “Change you can believe in,” but there was one key word that was branded on everything the campaign said, did, and produced.

And wouldn’t you know it, after eight years of disastrous leadership abroad, a lack of serious solutions to health care and economic challenges at home, and a thorough politicization and perversion of the federal government, voters were looking for exactly one thing. The same thing Obama was offering.

And now that he’s got the primary wrapped up, Obama is smart enough not to change. In what could reasonably be seen as his first speech of the general campaign, Obama used the word “change” over twenty times Tuesday night in Des Moines, Iowa. Instead of fine-tuning his message to appeal to a general election audience, Obama is pulling John McCain and George Bush into his preexisting frame. As Obama tells it, McCain, with his long career in Washington and his willingness to embrace Bush Administration policies on taxes, health care, and the war in Iraq, is part of what the American people are so desperately seeking change from. The political gods would have a hard time deliberately crafting a political climate better suited to Obama’s unique persona and message.

And so in the state where his unlikely but strangely inevitable presidential campaign began, Barack Obama moved to the next phase. He had kind words for Senator Clinton, calling her “one of the most formidable candidates to ever run for this office” and a woman who “has shattered myths and broken barriers and changed the America in which my daughters and yours will come of age.” He congratulated her on her victory in Kentucky but he made it clear that the time for a transition had come. He reminisced about the wintertime Iowa caucuses that legitimized him as a candidate and said, “tonight in the fullness of spring… we have returned to Iowa with a majority of delegates elected by the American people, and you have put us within reach of the Democratic nomination for President of the United States.”

John McCain was not treated as well as Senator Clinton.

“The Bush tax cuts for the wealthiest 2% of Americans that once bothered Senator McCain’s conscience are now his only economic policy. The Bush health care plan that only helps those who are already healthy and wealthy is now John McCain’s answer to the 47 million Americans without insurance and the millions more who can’t pay their medical bills. The Bush Iraq policy that asks everything of our troops and nothing of Iraqi politicians is John McCain’s policy too, and so is the fear of tough and aggressive diplomacy that has left this country more isolated and less secure than at any time in recent history.”

And using John McCain’s ongoing lobbyist mess as an opportunity to draw a contrast between himself and the Arizona Senator – both men who decry Washington’s influence-peddling culture – Obama said, “The lobbyists who ruled George Bush’s Washington are now running John McCain’s campaign, and they actually had the nerve to say that the American people won’t care about this. Talk about out of touch!”

But in one key respect, Obama is out of touch. It has been repeated so many times it has seemingly congealed into one of this country’s greatest and most unshakable truths: Obama has a problem with white, working class voters.

In Kentucky — the heart of the Appalachia region that Obama has struggled so mightily with — the Illinois Senator lost white voters 72-23 to Hillary Clinton, a massive 49 point spread. He lost voters making $50,000 or less 67-29, a 38 point margin.

We can used Tennessee, Ohio, and Indiana — three states that border Kentucky — as measuring sticks for Obama’s evolving support among white, working class voters. Tennessee, just south of Kentucky, voted as part of the Super Tuesday primaries on February 5th. Obama lost whites in the Volunteer State 67-26. That’s a 41 point spread. He lost the under $50,000 crowd 55-39, a 16 point margin.

But now look at West Virginia and Kentucky. Twenty-two percent of West Virginia exit poll respondents said race mattered in their vote. Eighty-two percent of them voted for Clinton. In Kentucky the numbers are roughly the same. Twenty-one percent said race mattered; 81 percent went for Clinton. These are voters in dominantly white states so open with their unease about voting for a black candidate that they will admit it to a complete stranger asking them questions outside a polling location.

Barack Obama’s campaign believes that Obama can expand the Democratic electorate — independents and young people will put votes in his column that members of his party don’t usually get. But the campaign may have to concede that Obama loses some voters as well. It may simply be the case that for some, Obama’s candidacy represents a change too great.