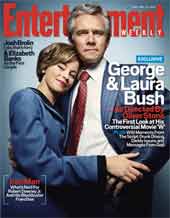 Entertainment Weekly has a “first look” at Oliver Stone’s W, the upcoming feature on our most awesomest president ever, starting Josh Brolin as the smirking W himself. Of course, by “First Look,” EW is stretching things a bit, since, as they say, “shooting begins in less than two weeks.” However, it sounds like Stone is trying to get the movie turned around in record time, with a release possibly coming “as early as October.” EW‘s article is six long pages; so I’ve collected some highlights after the jump:

The film will feature such flag-waving moments as the Commander-in-Chief nearly choking to death on a pretzel while watching football on TV and a flashback of him singing the ”Whiffenpoof” song as a frat pledge at Yale, not to mention scenes in which he refers to his advisers by dorky nicknames — ”Guru” for Condoleezza Rice, ”Turdblossom” for Karl Rove, ”Balloon Foot” for Colin Powell — while discussing plans for the invasion of Iraq with the coolness of a late-night poker game.

…In one Strangelove-like moment, he tries to sell Tony Blair on the idea of provoking war with Iraq by flying a U.S. plane painted with U.N. colors over Baghdad, baiting Saddam to shoot it down. ”Plan B is assassinate the sonofabitch,” Bush informs the horrified prime minister.

…Stone denies rumors that Robert Duvall turned down Cheney. And he won’t comment on reports that he’s talking to Paul Giamatti about the part.

…The director acknowledges that he had to speculate on some of the dialogue and delivery. ”You take all the facts and take the spirit of the scene and make it accurate to what you think happened,” he says.

I have to say, I’m not exactly a Stone “fan,” but this sounds pretty entertaining. One worries, however, it could stumble into the same territory as “Lil’ Bush,” the absolutely unwatchable Comedy Central cartoon featuring wee versions of Bushco and their wacky escapades, which purports to mock them but actually seems weirdly adoring of W, like the show’s actually being produced by a secret youth-propaganda wing of the Pentagon. Or maybe I’m just so sick of Bush’s face I can’t even watch somebody make fun of him? Frank Caliendo, I’m talking to you too.