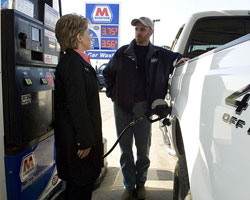 We’ve made it clear how we feel about the gas tax holiday being proposed by Sens. McCain and Clinton: It’s a boondoggle.

Seemingly every economist in America agrees. But the economists are in the wrong subfield of punditry: they look at the relevant numbers, come to a conclusion, and violavoilà — their moment in the spotlight is over. On the other hand, political analysts and campaign correspondents, unburdened by facts, can and have speculated for weeks about a question like which candidate the gas tax kerfuffle helps more. I’ve avoided entering this discussion, because the only way to comment seriously is to go to Indiana and North Carolina and conduct in-depth conversations with dozens of voters.

But what the hell.

There is some polling suggesting the universal condemnation the gas tax holiday has received from economists and editorialists has penetrated to the voters’ level. Seventy percent of likely voters in a NYT/CBS poll say that politicians pushing the gas tax are doing so because it helps them politically. McCain’s reputation for straight talk obviously inoculates him on this issue: 62 percent believe Hillary Clinton says what she thinks people what to hear, compared to 43 percent for Obama and 41 percent for McCain.

Obama has made hay out of the situation, hammering the idea that Clinton’s willingness to pander on an issue as important as the energy crisis is emblematic of the race as a whole. The refrain is familiar by now: She is the same old politics, he represents a fresh start. She plays politics as a cynical game, he respects the voters’ intelligence and speaks hard truths. Is it working? Who knows? But the fact that the situation fits perfectly into frames that the media has adopted (Clinton as untrustworthy and willing to say anything to win; Obama as elitist and out of touch with those all-important blue-collar voters), definitely helps keep the controversy alive.

Clinton is pushing hard on the issue. Her initial defense was that people are hurting and deserve whatever small relief the holiday affords. But over the weekend, she introduced for the first time the idea that she is proud not to have the experts’ support. In a conference call on May 1, Clinton communications director Howard Wolfson said, “Sometimes the president will do things that the quote-unquote experts will agree with, and sometimes the president will do things that experts quote-unquote don’t agree with.” The comment was mocked in the press because of its similarity to the anti-science, anti-expert approach of the Bush Administration (which edits global warming reports from government scientists, for example). But Clinton has embraced this know-nothingism. She is now saying that she is happy “elite opinion” isn’t on her side, because “elite opinion” doesn’t understand the plight of everyday working people.

And she’s gone even further:

STEPHANOPOULOS: Can you name one economist, a credible economist who supports the suspension?

CLINTON: Well, you know, George, I think we’ve been for the last seven years seeing a tremendous amount of government power and elite opinion basically behind policies that haven’t worked well for the middle class and hard-working Americans….

STEPHANOPOULOS: But can you name an economist who thinks this makes sense?

CLINTON: Well, I’ll tell you what, I’m not going to put my lot in with economists, because I know if we get it right, if we actually did it right, if we had a president who used all the tools of the presidency, we would design it in such a way that it would be implemented effectively.

Two obvious problems. First, the idea that the elite opinion opposing the gas tax holiday, which includes many liberal economists, is somehow the same elite opinion that has driven the domestic policies of the Bush Administration is a joke. In fact, it’s insulting to voices on the left who use their expertise to serve progressive goals. The Clinton-friendly Paul Krugman has come out against the gas tax holiday — and he’s been a passionate voice, indeed an elite voice, against the Bush tax cuts and other Bush Administration ideas that have helped to drive the economy into the ground these past eight years.

Second, the Bush Administration’s problem isn’t listening to elite opinion. It is the opposite — the Administration is driven by ideology and heeds experts only when they confirm previously held beliefs.

But slamming the elites, even the ones who are usually on your side, is a perfectly acceptable move in American politics. If Clinton went out tomorrow and slammed small-town Americans as an undifferentiated group, she be absolutely massacred. But economists are not a beloved bunch in Indiana and North Carolina, and they can be thrown under the bus in pursuit of a few extra delegates.

All of that said, Obama probably wins on the gas tax holiday for a far simpler reason: It takes Jeremiah Wright off the front pages. The fact that the talking heads on TV, the newspaper columnists, bloggers like me, and the candidates themselves are discussing something else — and a policy matter at that! — is a victory for Obama. But the fact that many Americans now think a gas tax holiday is a worthwhile part of America’s approach to the energy crisis means that serious solutions on climate change are the likely loser.