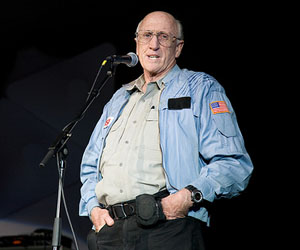 Photo used under a Creative Commons license by flickr user <a href="http://www.flickr.com/photos/laughingsquid/">Laughing Squid</a>

Stewart Brand: Might well be space solar. Because the main problem with solar on the Earth’s surface is that it is so intermittent, and we don’t have decent storage yet. The advantage of having something out at synchronous distance is that it’s in the sun all the time. You can beam down, via microwave, significant juice, about nine times greater than you’d get on the Earth’s surface.

MJ: Wouldn’t that cost a lot?

SB: Yeah, that’s a big one, probably on the order of a large dam or something. The main cost, as usual, is getting stuff out of the gravity well of the planet. But one advantage of a solar collector in space: It would be some kind of origami thing that would unfold and be relatively light because it doesn’t have gravity to deal with. All you’d have to do is be able to steer it or have it be self-steering, so it points at the sun and sends the energy down to a big receiver on the ground. Like all the energy stuff, it’s basically infrastructure.

MJ: What do you think is the most overhyped new energy source?

SB: That’s a good question. It changes from month to month. Ethanol was hot for about two weeks, and then it became everybody’s favorite bad idea. In a way it still is. It needs to be subjected to more of the full-footprint-type analysis, because there is a fair amount of it going on and it’s driving up food prices and taking down forests and doing all the things you don’t want. Palm oil looks like it may be in the same category, depending on basically execution. If you tear up a swamp in Indonesia that was fixing carbon and turn it into a palm plantation, people should not get tax credits for that.

MJ: If you had a million dollars to invest in energy, where would you invest it?

SB: Well the easy one is nuclear, because it’s so proven and the companies that are doing pretty good work are already well known, so that’s just an easy investment. Not a big gain, but probably would do okay. The genetically engineered stuff, especially the microbial stuff, there are a whole lot of people working on making some stuff that will basically grab CO2 right there where it is generated in the coal plant and turn it into something you can use, like hydrogen. Whether this will be done with larger plants, I don’t know. There is some good tinkering that could be done with switchgrass and whatnot, to make it more energy productive, but knowing which company to invest in at this point, as an ordinary guy I wouldn’t know where to put a million dollars.

SB: It already is: Wind is mainstream, hydro is mainstream—16 percent of world electricity production in 2004. By the way the rest of the numbers, coal is 40 percent worldwide, oil is 7 percent and gas is 20 percent, so there’s your fossil fuels. Renewables are 2 percent, and if you include hydro as renewable then it’s a total of 18 percent. That’s more than nuclear and almost as much as gas. Here in California, there’s 16 percent nuclear, quite a lot of hydro, quite a lot of gas. Anyway, hydro is huge and is the great unnoticed because it has been there so quietly for so long.

MJ: But dams cause a lot of environmental degradation.

SB: Right at the start, yes. Then you’ve pretty much done your degrading.

MJ: But, I mean, what’s happening in China now with dams—

SB: Thirty-two dams being built as we speak, plus the Three Gorges.

MJ: Would you rather live next to a nuclear plant or a coal plant?

SB: Boy, is that a softball! Obviously a nuclear plant, because they are fabulously clean and tremendously safe, and coal-fired plants are pretty gnarly. Most of the nuclear plants in the U.S. are in the South, and people there love them, mainly in terms of employment. Everyone works there. They have a really good feeling about the place.

MJ: But there’s also the potential for something to go drastically wrong.

SB: Of the four major, legitimate complaints about nuclear—high capital costs, safety issues, storage, and weapons proliferation—the safety one has pretty much been dealt with. It’s nothing compared to the safety issues with natural gas. And when eventually we start sequestering carbon dioxide, that’s a poisonous gas. Basically all of the infrastructure stuff is dangerous. Bridges are dangerous. If you build a tall building in New York, it is dangerous if somebody runs an airliner into it. This is pretty much the infrastructural stuff that comes along with large quantities of energy. Whichever technology we are looking at has serious hazardous issues.

SB: It’s too late. We’ve got [nuclear weapons]. And China has got them, India has got them, France’s got them so in those places, which are the main energy users where you would want a lot more efficiency and a lot less carbon, it is not an issue. In the developing countries that people are worried about in terms of weapons, you could have a deal where you completely monitor them. Sell them fuel and buy back the spent fuel, process it, and sell them a fresh load of fuel. They get to do the whole thing, but they don’t get to reprocess it in their borders until they’ve satisfied the UN or whoever that they’re going to be responsible about it. That’s no different than selling and buying any other energy source.

MJ: What do you think is the one policy change that would go the furthest toward cutting fuel consumption in the United States?

SB: Carbon tax, cap and trade, either or both.

MJ: That’s interesting. A lot of people have said that cap and trade isn’t as good of a solution as a tax would be.

SB: Either one of them would have to be constantly fine-tuned and adjusted. Cap and trade has worked pretty well in cutting the sulfur emissions that led to acid rain. And Europe just had a pretty good experience with cap and trade. Carbon tax has the advantage of basically being able to subsidize one set of activities that you want with another set of activities that you don’t want. It’s like a cigarette tax. Take the cigarette money and put it in education; everybody feels good about that. When the government tries to run innovation, sometimes it does it well and sometimes it doesn’t. So setting up a situation where the market runs innovation, which is a cap-and-trade idea, may well have more flexibility.

MJ: What energy policies do you think the next president should enact in his or her first 100 days in office?

SB: An easy, conspicuous thing to do—that may or may not have that much real effect —is to do what Australia did when it had a change of government, and that is to sign the damn Kyoto Accord. We’re the last holdout, and it’s ugly and looks stupid. Kyoto by itself can’t do nearly as much as we want, but to be a holdout at this point is just an insult to everybody.

SB: I’m about to renew a lease—or not—on a Land Rover. Which is a pig. But so far I haven’t found a decent hybrid off-road vehicle.

MJ: What is your favorite personal energy-saving trick?

SB: I live in a tugboat with 450 square feet. And living in a city is bloody brilliant, especially in Manhattan, which has good public transit and punishes you for driving.

MJ: That’s surprising, since the Whole Earth Catalog was so much about—

SB: Right! Back-to-the-land. I did the catalog so I could help [communes] without actually having to live on one. Partly that’s due to the boredom of the remote countryside. You wind up in a very repetitive soap opera, and that’s why everybody in the world is running to town as fast as they can.