Is the Bush administration bent on military confrontation with Iran in its final months? Is the White House preparing the American public for another war? Retired Air Force Colonel Sam Gardiner is an expert on military strategies and strategic games and he’s been worried for a while that the Bush White House is moving toward direct military engagement with Iran. He writes, “Either directly or through proxies, the United States is fighting Iran in Afghanistan, Iraq, in three or four regions in Iran itself, in Lebanon, and in Syria.”

His hunch is that Bush and his advisers are preparing a formal warning for Iran and that the next incident involving a US-Iranian clash “could justify an air strike against the training camps inside Iran.” He adds, “National Security Advisor Stephen Hadley told reporters on a trip to the Middle East that the United States was entering a period of ‘increased pressure’ on the Iranians. An Israeli spokesman said…both Israel and the United States agree that tangible steps need to be taken against Iran.” In addition, Gardiner notes, Israeli Army radio reported recently that, during the president’s trip to Israel last week, a senior Bush administration staffer told Israeli officials that President Bush and Vice President Dick Cheney support military action against Iran (a claim the White House has vehemently denied). “Strong statements can force policy,” Gardiner adds. “The situation in the Middle East has gotten more serious in the past week. Both the United States and Iran have made public statements that may force even more fighting.”

Looking for evidence that the White House is heading (and driving the country) toward war with Iran, Gardiner monitors what he calls “the message volume”—the amount of talk about Iran in the media that he believes is mostly generated by the White House. As he concedes, this is an imperfect measurement. But it does cause him concern. Below is a report Gardiner prepared for Mother Jones that shows what he considers to be a troubling rise in the message volume related to Iran.

The White House pattern is well established. When administration officials are working to control a message, they do so using both content and volume. I’ve found it useful to understand the direction of policy by watching the message volume.

My methodology is not particularly sophisticated. Every morning, I Google News the issue I’m following and record the number of English language articles that come up.

As an example, during the run up to the 2004 presidential election in the United States, it felt as if the White House was trying to create fear to support the argument that George Bush should be reelected. That intuition was measurable using this method. 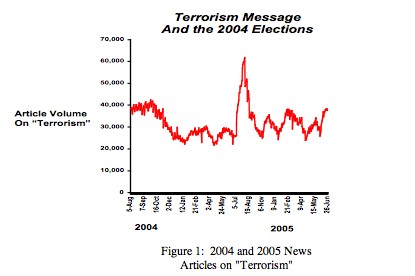 In the chart above, we can see what appears to be the product of a well-managed message campaign. When a strategic communications theme has been selected, senior members of the administration give speeches on the subject, the president will talk about the topic in press conferences, and “officials” will grant interviews to major print press outlets to discuss the matter. And in these circumstances, we’ll hear from more than government sources. For instance, in materials recently released by the Pentagon to the New York Times for a piece on military analysts, there were numerous mentions in Pentagon e-mails about getting think tanks to support a particular message.

The result of all this is a tremendous echo. In the case of terrorism and the 2004 election, the volume was more than double the normal coverage of the subject. And if terrorism was the administration’s topic of choice for 2004, what is it for 2008? The administration’s strategic communication theme is not terrorism. The terrorism coverage of late looks like the vital signs of a dead patient: flat-lined. Iran, though, seems to be emerging as the dominant theme. This is the past 60 days of the Iran message. 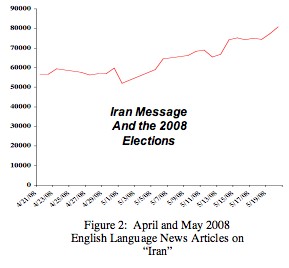 The President’s recent visit to the Middle East is an example of how the administration can keep the Iran message dominant. At every stop, President Bush talked about the threat from Iran. If he mentioned Iraq in any of his major speeches, I did not find it. Apparently, Iraq is to be kept off the front pages.

Gardiner predicts that the administration’s message on Iran—content-wise—will increasingly focus on “what Iran has been doing to America,” as the United States charges Iran with supporting attacks on U.S. forces and interests in Iraq. Meanwhile, Gardiner notes, Tehran has been vocal about what the United States has supposedly been doing to Iran: “In what has been an unusual series of statements and escalation by the Iranian government, the United States has been accused of direct attacks on Iranians and inside Iran. Iran accused the United States of being behind the attack on Iranian diplomats in Baghdad last week. Iran has painted an extensive picture of the United States being involved in the bombing of a mosque in Shiraz in April. In their story, the Iranians say they have uncovered a CIA network that planned many bombings, including oil facilities. Although none of this may be true, the statements represent a ratcheting up.”

And a ratcheting up on either side, Gardiner notes, could trigger a military confrontation, intended or not.