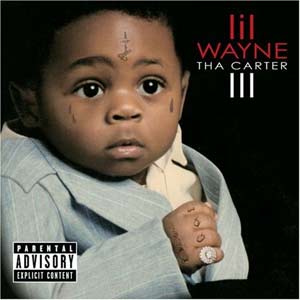 Delays are never, ever a good sign. If the release of your highly-anticipated creative work keeps getting pushed back, it’s pretty much a given that when it finally emerges, it’ll be bloated and uneven, overcooked in spots and raw in others. I’d hoped mixtape master Lil Wayne would prove the exception to this rule, but the long-delayed Tha Carter III (in stores today) is more mixed bag than mixtape, with brief hints of the head-spinning magic that made his bootleg releases so exciting marred by dull (if financially successful) attempts at mainstream appeal.

For a while yesterday, The New York Times web site had Weezy on the tip-top of the front page, and in the article, Jon Pareles claims that the 25-year-old rapper is finally aiming for accessibility, having “already gone as far as he can within hip-hop.” He’s right to call lead single “Lollipop,” with its auto-tune melody and straightforward beat, a piece of easy-to-digest “bait” meant to draw listeners into Lil Wayne’s world. Okay, I’ll bite, and Tha Carter III definitely has more satisfying fare. “A Milli,” with its glacial beat and insistent vocal loop, provides a perfect canvas for Wayne’s wild lyrical turns: “I don’t owe you like two vowels / But I would like for you to pay me by the hour / And I’d rather be pushin’ flowers / Than to be in the pen sharin showers.” Sometimes surreal and often hilarious, Wayne claims his lyrics are improvised, and while their stream-of-consciousness flow seems off-the-cuff, their complex rhymes and quick puns are often astonishing.

Wayne’s strange, soaring lyrics were a highlight of his mixtapes, which were also exciting for their choice of unlikely-to-ever-be-legally-cleared samples, from Mims to the Beatles. However, on Tha Carter III, that populist instinct seems to have led to middle-of-the-road pablum like the Babyface-featuring “Comfortable,” a generic slice of sunny R&B whose “twist,” lyrics that tell a girlfriend not to take Weezy for granted, just feels cheap. The multicolored diversity of the mixtapes seems to clash here: the album features no less than 13 different producers on its 18 tracks, ending up scattershot and overextended.

Wayne still may be right to proclaim himself the “best rapper alive,” and there are enough clever lines and tongue-twisting acrobatics on Tha Carter III to justify Jay-Z’s calling him his “heir” in a guest appearance on the somber “Mr. Carter.” When it’s straightforward, it’s great: the Kanye West-produced “Let the Beat Build,” with its basic gospel loop and piano line, hints at a New Orleans-referencing style, at once playful and mournful for Wayne’s hometown. But too often, the album has been over-polished, to the point that Wayne’s sharp wit has been dulled. But hey, I’m sure he’ll have another brilliant mixtape out in a few weeks anyway.

Tha Carter III is out now on Cash Money/Universal.