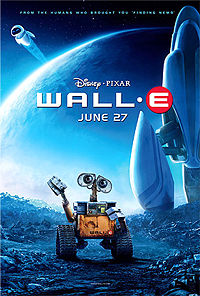 I posted about the viral web site accompanying the new Pixar project Wall-E back in October; the site, a parody of corporate propaganda, was amusing, but even back then I said the movie looked like it would be “another cutesy romp with big-eyed creatures on some sort of quest.” (Yes, I just quoted myself). By now we’ve seen actual clips and trailers, which have only confirmed my suspicions that this is Short Circuit 3: cute bleepy robots with big googly eyes! But shut my mouth: word around the intertubes is that Wall-E is the greatest thing to get projected onto a screen since Citizen Kane. A.O. Scott in the NY Times says the film is “a cinematic poem of such wit and beauty that its darker implications may take a while to sink in,” and that’s just the first sentence, while Michael Phillips in the Chicago Tribune calls it “the best American studio film so far this year.” New York Magazine‘s Vulture blog has even started a campaign to get the film nominated for “Best Picture” (although they did also champion that Cavemen TV show). Sure, it turns out that Wall-E‘s cute little robots mask what is apparently a horrifying vision of humanity’s future, with Earth abandoned to garbage and humans devolved into moronic blobs. Serious stuff. But we’ve seen dystopian visions before, even ones with mountains of garbage, and that doesn’t necessarily a good movie make, Mike Judge. Little robot Wall-E even has a love interest called, um, EVE; this whole thing sure seems like a compendium of movie clichés.

Everybody loved Ratatouille, too, and I thought that was pretty underwhelming; the animation was appropriately warm and glowy, but similarly to Finding Nemo, the anthropomorphism was inconsistent and disorienting, and often kind of creepy. Plus, as we saw in Star Wars: The Phantom Menace, having too much money and too many animators can make your hyper-realistic backgrounds a little overwhelming. Computer animation tends to forget that great cinematography, like in, say, 2001: A Space Odyssey, has a graphic simplicity; just because you can draw every blade of grass doesn’t mean you should.

Well, anyway, Pixar, I’ll at least give you my matinee ticket price, and if it turns out to be spectacular, I’ll eat my words. Riffers, if you catch Wall-E this weekend, post your thoughts in the comments: Oscar-worthy examination of humanity’s downfall and the dark side of consumerism, or the robot E.T.?