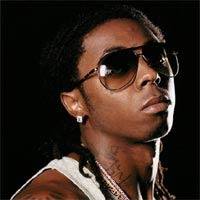 Take that, internet naysayers: Lil Wayne’s new album Tha Carter III has sold over 1 million copies in the US in its first week, the first time such a figure has been reached since 50 Cent’s The Massacre way back in early 2005. Since Wayne has been, shall we say, slatternly when it comes to online mixtapes and file-sharing downloads, the press seems astonished: why are people buying CDs from an artist with so much free stuff out there? The New York Times even set up the dichotomy in the headline, proclaiming that “Despite Leaks Online and File Sharing, Lil Wayne’s New CD is a Hit.” Maybe they should change that “despite” to a “because”? As file-sharing tracker BigChampagne CEO Eric Garland says in the article, fans who download Lil Wayne grab an average of ten of his tracks (as opposed to two for other artists) and “while people who like an individual song are not going to open their wallets for you, people who like 10 songs will.” So having a prodigious amount of your work out there for people to hear may actually help you sell more CDs? Karrr-azy!

Although, as Vulture points out, people may just like candy-themed oral sex metaphors, as both The Massacre and Tha Carter III feature lead singles that “compared a sexual act to the consumption of lollipops.” Although if that’s the case, why wasn’t Lil’ Kim’s “How Many Licks” a smash?

After the jump: Was Party Ben wrong about Tha Carter III?

Either way, Tha Carter III is getting much better reviews around the intertubes than I gave it here, an 8.7 from Pitchfork, an “oh my god it’s so good” from Stereogum, 4.5/5 stars from Rolling Stone. I have to admit that I’m enjoying it a bit more than I expected to this week, and I think I made a bit of a journalistic error in my review, criticizing the album for what it isn’t (i.e., a mixtape) rather than what it is, making it more about my expectations than the work itself. Even the retro-smooth “Comfortable” is getting stuck in my head. I have noticed an odd trend, though: why is it that critics and sites like Pitchfork seem to evidence one relationship of rating-to-popularity for hip-hop, and the inverse relationship for all other music? What I mean is, their best-reviewed hip-hop albums are also the biggest-selling (see, for instance, Kanye West, who also got an 8.7, coincidentally), whereas the other CDs Pitchfork liked this year are about as obscure as can be: Hercules & Love Affair, Fleet Foxes, No Age. Somehow, hip-hop artists can sell a million CDs and still be worthy of our attention, unlike, apparently, every other musical genre. How do they do it?