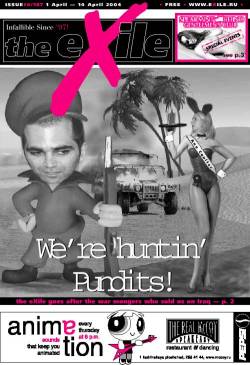 Sad news out of Russia this week. The AP reports that The eXile, the English-language biweekly for Moscow’s expatriate community, is going out of business following an unannounced inspection by officials from Russia’s media bureau that scared off the paper’s financial backers.

The temptation in eulogizing The eXile is to string together lengthy excerpts of the paper’s best work. But I’ll keep it to a few quick hits: It’s where Matt Taibbi got his start; it published a military affairs column by “War Nerd” Gary Brecher, a data enterer who, according to his Wikipedia entry, describes “himself as a fat slob who spends approximately 8 hours a day on the internet searching for war news”; in 2001 the editors famously “stormed into the Moscow bureau of The New York Times and threw a pie filled with equine sperm into the face of the bureau chief after accusing him of soft coverage of Russia’s political elite.” And even with their Larry Flynt-like standards of taste and decency—even while describing their most malicious pranks in vile detail—the editors managed to come off as the good guys.

Really, it’s a measure of the paper’s brilliance that it managed to be consistently interesting and readable while covering a country that plenty of readers, like me, had never even laid eyes on.

Over at Radar, Mark Ames, who founded The eXile 11 years ago, has been providing some hilarious coverage of the slow death of the paper. Here’s a sample passage, in which officials from the Federal Service for Mass Media, Telecommunications, and the Protection of Cultural Heritage quiz Ames on eccentric opposition leader/eXile columnist Eduard Limonov (slightly censored because The Riff is a family blog):

The officials asked us why Limonov was in our paper. Did we know much about him? Why did we publish him? Why was he on our masthead as a contributor? They asked to see an example of a recent Limonov column—the first one I pulled out was titled “Mr. Limonov on Mr. Medvedev”—I quickly shoved it under a pile and grabbed the next column I could find. They took that issue, and two others, with them, and told us that they’d have experts translate and check to see if we’d violated laws on printing “extremism,” “inciting national hatred,” “pornography,” and “pro-drugs propaganda.”

Here are a few of the Limonov lines from the article I gave to the officials, written in his trademark broken English: “Russian Government is bloody beast eating human flesh. It is deeply medieval in its principle conceptions … Russian women are very, very bad. The worst of all. Russian women is like the Russian Government. … I am absolutely and positively on the side of Muslim strict code of behavior for women. Their system of separation of sexes if effective and healthy.”

Diehard fans should check out The eXile: Sex, Drugs, and Libel in the New Russia, coauthored by Ames and Taibbi. There’s also a collection going to save the eXile’s Web server.