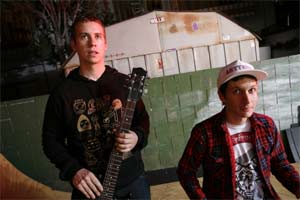 Nouns, the new album from the Los Angeles-based No Age (left), is fast becoming one of the most acclaimed albums of the year, with high marks from Pitchfork and NME. The album’s sound, as Pitchfork put it, is “cacophonous” and “gorgeously thick,” punk rock with a swirling, tone-bending My Bloody Valentine sheen. What might surprise you is that the band is actually a duo: just two guys, Randy Randall and Dean Spunt, playing guitar and drums respectively, their sound filled out by loops and samples. Lately, this seems more and more common: most of the interesting developments in rock music are coming from “non-traditional” band lineups. Is the good old rock four-piece an endangered species?

After the jump: I still haven’t found the U2 I’m looking for… but I do have a No Age mp3!

Bands seem to be both shrinking and expanding. The rock duo is turning out to be one of the trends of the new millennium, whether it’s bassless wonders like the White Stripes or the Kills or thudding bass-driven experimentalists like Death From Above 1979. Then there are the lone wolves, like PJ Harvey, off in her own world, and Bright Eyes’ Conor Oberst, too much personality for just one band. Probably the leading hard-rock combo of the last ten years, Queens of the Stone Age, is essentially a solo project, with rotating “session musicians” backing up Josh Homme (some of whom just happen to be really famous). On the other end of the tour bus, Arcade Fire’s Wikipedia page lists seven current and six former members, and New Pornographers count as many as eight. So, where have all the U2s gone?

Examining the Village Voice 2007 Pazz & Jop Poll 2007, the top 40 Best Albums list includes the following groups who could be considered “rock bands,” more or less: Radiohead, Arcade Fire, Spoon, The National, Wilco, The White Stripes, Battles, The Shins, Against Me!, Band of Horses, Deerhunter, Grinderman, Okkervil River, and Rilo Kiley. Okay, that’s actually more than I expected, but let’s take a closer look. Out of those 14 bands, eight are groups of four or five (discounting Wilco and Okkervil River because of their goofy rotating memberships, and Grinderman because it’s got Nick Cave in it). Of those, Battles makes freakish prog jams in 6/8 time, Rilo Kiley just made an strange, funky album inspired by “’70s L.A. coke-rock” (as Wikipedia puts it), and Deerhunter and Okkervil River are so quirky, they’re almost not even rock any more. So, that leaves us with Radiohead, Spoon, The National and Against Me!, four combos who are apparently leading the traditional rock band pack. All quite good, don’t get me wrong, but is that all there is?

Clearly I’m defining “rock” in pretty strict terms here to prove a point, but still, the rock band seems to be in a state of reinvention: take away as much as you can like No Age, or just bring everybody up on stage like Arcade Fire. Otherwise, you’re just, I dunno, Seether. So, Riffers, is the rock band just in a rough patch, or are we truly in an era of reinvention, watching the old forms die out? Either way, don’t miss out on the new forms: No Age’s Nouns is out now on Sub Pop.