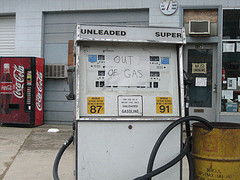 A lot of the articles I read about the state of our economy include interviews with people like this woman, who in January found her rising costs so terrifying that she began sending her sheets and towels to a laundry service instead of a dry cleaner. They brim with pity for urbanites forced to abandon Starbucks and scale back weekly hair appointments, and suggest that readers consider such monastic choices as cooking for themselves and renting movies rather than going out.

But for our country’s rural poor, even video rentals are now a luxury that many cannot afford. Today’s New York Times reports that in rural areas across the country, and particularly in the deep South, people are spending over 13% of their income on gasoline—compared to an average of 4% nationwide. “These are people who have to decide between food and transportation,” says one fuel price analyst. From the story, which is worth quoting at length:

Anthony Clark, a farm worker from Tchula [Miss.], says he prays every night for lower gasoline prices. […] A trip from Tchula to the nearest sizable town about 15 minutes away can cost him $25 roundtrip—for the driving and the waiting. That is about 10 percent of what he makes in a week.

Taking a break under some cottonwood trees beside a drainage ditch filled with buzzing mosquitoes, Mr. Clark and members of his work crew spoke of the big and little changes that higher gas prices have brought. The extra dollars spent at the pump mean electric bills are going unpaid and macaroni is replacing meat at supper. Donations to church are being put off, and video rentals are now unaffordable.

Local governments are leaving grass high along the roads and doing fewer road repairs to save on fuel costs. The Holmes County government has cut the work week to four days to give workers gasoline relief (keeping the same total of hours), and politicians are even considering replacing sanitation workers with prison inmates on some shifts to conserve money for fuel.

The story of the South should be a cautionary tale. Here in California, Governor Schwarzenegger’s budget proposal would hack close to $1.5 billion from public transportation beginning in July, despite the fact that gas prices are among the highest in the country and transit ridership is up significantly across the state. A paradigm shift is sorely needed—but in the meantime, maybe the hypermilers have the right idea.

UPDATE: The Times has an excellent map showing the varying impact of gas prices across the country. Prices in Holmes County, Miss. are actually among the nation’s lowest.

Photo used under a Creative Commons license from seanfraga.