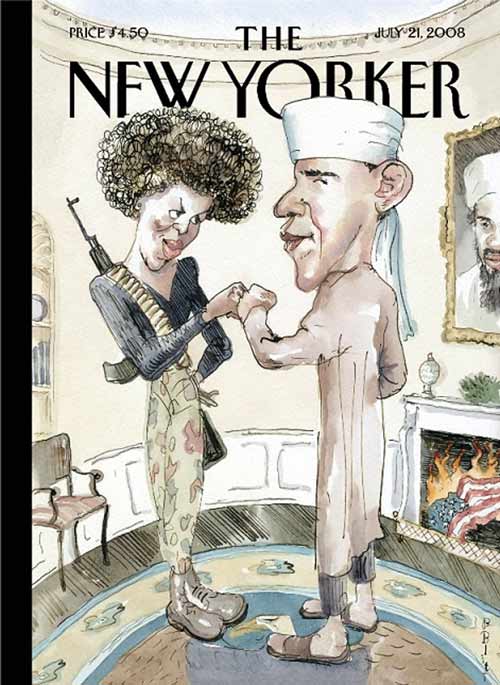 Weren’t we just having a discussion here on the Riff about the thin line satire walks, between being the opposite of a thing and an endorsement of a thing? Well, brace yourselves, because the New Yorker has jumped right into the middle of that argument with a cover that made my jaw actually drop. The July 21st issue features a be-turbaned Barack and an afroed, gun-toting Michelle Obama, celebrating their arrival in the White House with a good old terrorist fist-bump. They’ve also apparently done a little redecorating, tacking up a portrait of Osama bin Laden and tossing an American flag into the fireplace for good measure. The illustration, called “The Politics of Fear,” is described in a New Yorker press release as satirizing the “scare tactics and misinformation in the presidential election”; as the Huffington Post put it: “all that’s missing is a token sprig of arugula.”

After the jump: the full cover, the campaigns’ responses, and when did the New Yorker become America’s chaos-inducing art terrorist psycho?

The campaigns aren’t laughing: Politico says Senator Obama was asked about the cover earlier today and answered “I have no response to that.” The campaign followed up with a statement saying they understand it is a “satirical lampoon” of a right-wing caricature, but that they found it “tasteless and offensive.” The McCain campaign immediately said they “completely agree.”

From Wikipedia’s entry on satire: “The purpose of satire is not primarily humor in itself so much as an attack on something of which the author strongly disapproves… Because satire often combines anger and humor it can be profoundly disturbing – because it is essentially ironic or sarcastic, it is often misunderstood.” Well, the cover’s already up on Drudge, so there you go. Is the New Yorker like the Joker in the upcoming Batman movie, treating America as if it’s their own radical art project? By pouring gasoline onto the tinderbox of this political season, the magazine is almost saying “I love chaos”: It’s impossible to predict how exactly this will play out, but you can almost guarantee somebody’s going to get hurt. Am I part of the chaos by posting a larger jpeg below? Who knows. I just hope those smart magazine people know what they’re doing.

[Update: Artist Harry Britt has responded to the building brouhaha, saying he found the branding of the Obamas as unpatriotic or terrorists “ridiculous” and that “depicting the concept would show it as the fear-mongering ridiculousness that it is.” When asked if he is “glad he made the art,” he responds, “The magazine just came out ten minutes ago, at least give me a few days to decide whether to regret it or not.”]

[Update #2: I’ve realized what the problem with this cover is and come up with a solution. Britt’s previous (and hilarious) illustrations (see three at HuffPo here) all mock the subject of the drawing through placing them in ironic positions to highlight their hypocrisy: the Bush administration’s handling of Katrina is satirized by flooding the White House, Ahmadinejad’s statements on homosexuality’s non-existence are disproven by a bathroom stall come-on. They’re wry and funny because there’s an element of comeuppance. The current cover doesn’t satirize the attacks on the Obamas so much as it merely combines them, and the real target of the supposed satire (Fox News?) is left unspoken. But here’s how it could have worked: the exact same drawing, except with John and Cindy McCain in place of the Obamas. Funny! Am I right?]