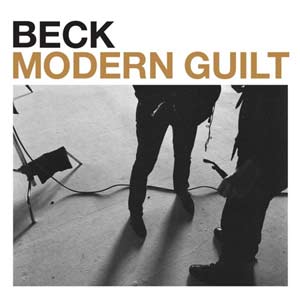 You’d think, in this exciting Age of the Intertubes, that the music album, freed from physical constraints, would have expanded like American waistlines. No longer tied to the 56-minute-ish limit of the vinyl LP or the 80-minute cutoff of the CD, you’d expect our self-indulgent, uncontrollably nutty musicians to start putting out 3- or 4-hour albums, with, say, 60 or 70 of their newest compositions. But no, just the opposite seems to be happening: albums are getting shorter. Take this Beck thing that just leaked out onto the aforementioned internet: it’s 32 minutes long. That’s ten quick songs. I thought I’d give it a spin today while I was working on other stuff; I’d barely sat down when it was already over, and the next thing up in my alphabetical iTunes library, a Bee Gees remix by the Teddybears, thundered out incongruously. I had this experience all day, starting Modern Guilt from the beginning, only to have it slip by without me really noticing it, and then, blam: Bee Gees. There it goes again. This album has probably run through at least six times by now here at Party Ben HQ, and I keep trying to pay attention, but it keeps melting into the background, and I’m starting to think it’s not me that’s the problem.

“Chemtrails” was an intriguing tease, a morosely psychedelic number whose mumbled lyrics about “watching the sea full of people/try not to drown” hinted that Modern Guilt might be even more ambitiously dark than 2006’s melancholy The Information. Lyrically, that’s true; “Walls” asks our apathetic nation “what are you gonna do/when those walls are falling down on you,” for instance. But musically, there’s nothing here quite as intriguing as “Chemtrails.” Things aren’t “dark” so much as they are subdued, almost muffled; producer Danger Mouse indulges his love for the double-time “Hey Ya” rhythm on a couple tracks, but even on the uptempo “Profanity Prayers,” the beats seem distorted, like they’re being played with big felt-covered mallets. There’s a lot of interesting Danger Mouse-style sounds, weird jittery percussion and sped-up voices, but somehow, nothing really reaches out to grab you. Only album closer “Volcano” evokes the emotional impact of great Beck tear-jerkers like “Lost Cause” or “Nobody’s Fault But My Own,” although the lyrics are a bit awkward: “I’ve been riding this train so long I can’t tell/if it’s you or me that’s driving us into the ground.” Train… ground… drive… hmm.

Mutations, Beck’s great 1998 album that firmly broke with his “Loser” reputation, was wracked with sorrow and loss, but still seemed bright and awake, a full-fidelity, vivid-color portrait of despair. Modern Guilt just sounds depressed, grayscale, like its downcast and dusty cover photo. It’s not that I don’t like it, because I do; but I also kind of want to call Beck up and see if he’s OK.

Modern Guilt is out July 8 on Interscope.