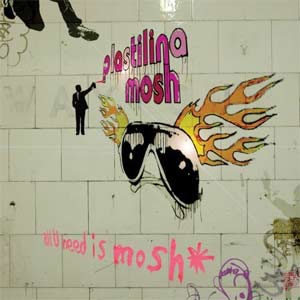 When is a band not a band? Okay, the bio says Plastilina Mosh is a duo from Monterrey, Mexico, and they have albums and some hit singles just like other bands. But they sure don’t take themselves very seriously. In a recent interview, multi-instrumentalist Alejandro Rosso said they didn’t think of P-Mosh as a “career”:

At this point, if you think about it, most of the groups that started with our generation, like Molotov, Control Machete, Zurdok, they’re no longer here, and we go on with the same idea, that is to not take everything so seriously, we do not believe that we are the truth nor are we an innovative group. We are a project that amuses us and we take this lightly, and somehow it’s worked.

It’s worked, but it can be a little disorienting. For All U Need is Mosh, the duo’s first album of new material in five years, they’ve reinvented themselves again, with strange, intriguing results.

All U Need is Mosh kicks off new wave-style with “Toll Free,” an angular take on Franz Ferdinand-esque dance-rock. Oddly enough, the slightly awkward English lyrics actually work, giving the track a kind of winking distance. Things get even less serious from there: on Track 3, a crowd chants “Everybody wants to go to my party,” an LCD Soundsystem-like chant over a groovy retro-Fatboy Slim beat. They name-drop Paris Hilton, evoking Brazilians CSS, whose invocation of the hotel heiress was so deadpan Ms. Hilton herself danced to it. Another costume change for Track 4, “Let U Know,” where they become the Hives, banging out garage-rock chords. Where is this album going?

In a sense, the eclecticism serves to break down your defenses, and by track 8, “Going to Mars Bolton,” the listener isn’t sure what to expect. Here’s what you get: a track that starts out strutting like a rock Daft Punk, with computerized, Frampton-like vocals, then mutates into a series of hypnotic synth arpeggios, evoking Boards of Canada, unexpectedly melancholy. Track 10 is a bass-guitar-led instrumental overlaid with what sounds like a drum cadence; that explains its title, “San Diego Chargers.” These songs are listener-friendly but deeply strange, hinting at Rosso’s classical and avant-garde history.

In refusing to take themselves seriously, Plastilina Mosh run the risk of the listener not taking them seriously either. But their “lightness” is like Milan Kundera’s: a sense of freedom that’s not without depth. “Mars Bolton” includes a quick sample, a woman’s voice saying “What you intend to do with sound is of the utmost importance.” How’s that for not being serious. Somehow, P-Mosh can maintain both points of view: an ability to take musical leaps like nothing matters, while understanding that really, there’s nothing else that does matter.

All U Need is Mosh is out August 5 on Nacional.

Grab an mp3 of “Arriba Dicembre” and stream “My Party” at RCRD LBL here, and an mp3 of “Pervert Pop Song” from MTV Tres here. Single “Let U Know” is out now on iTunes.