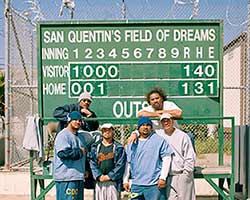 On a clear May afternoon, Chris Rich stood on the mound of a rugged baseball diamond surrounded by high walls and barbed wire. He wore the uniform of the San Quentin Giants, the only baseball team in the California state prison system. Rich, a 48-year-old, 6-foot-8 right-hander, had twice taken St. John’s to the College World Series before being sentenced to life for murder. Now he only plays home games, like today’s match against my team, the Mad Dogs. Despite his height, Rich didn’t throw much harder than the high 70s, though he told me that back in the day he regularly sat at 92 miles an hour. Still, he had no trouble dispatching our hitters in the first inning.

A half hour earlier, I’d driven through the gates of the maximum-security prison, which sits on a picturesque point that juts into San Francisco Bay. Our team gathered at the gate to get the rundown on what we couldn’t bring in (cell phones, cameras, food, water, any kind of tobacco—a felony). We weren’t the only visiting players: White-haired men in polo shirts, holding tennis rackets, were getting the same briefing from another guard, as were a handful of basketball players getting ready to go up against a prison team that could give the 1980s Bad Boys Pistons a run for their money. Once we were briefed, a guard stamped our hands with fluorescent ink and we entered an intermediate cell. The heavy gates clanged shut behind us and the ones in front swung open into the prison yard.

The sloping path down into the yard curved past the building that houses death row and opened into what could be mistaken for a bustling school yard, with basketball and tennis courts, a horseshoe pit, and guys playing pickup soccer and doing push-ups. The guys are tattooed and big, but not too big: Weightlifting equipment was recently taken off the yard because the inmates were getting too pumped up for the guards’ comfort. Prisoners were racially self-segregated across the yard, but the baseball field seemed to be the one place where color lines didn’t apply.

A good-sized crowd had gathered around the field to watch the game. The Giants were already loosening up, looking like pros in their crisp black-and-orange uniforms, donated by the San Francisco Giants. That didn’t help them against our pitcher’s fastball. The first two innings were scoreless, and as the game went into the third inning it was shaping up to be a pitchers’ duel. 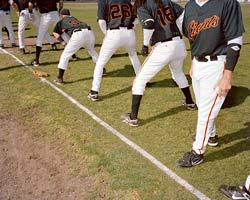 As I jogged out to center field, I reviewed the unique ground rules. In right field, scraggly grass gives way to pavement. Beyond that are the tables where inmates hang out, and any ball that makes its way out there is a ground-rule double. In right field, some of the rowdiest Giants fans sat on makeshift bleachers under a scoreboard painted with the words “San Quentin’s Field of Dreams.” Throughout the game they chanted, “Let’s go Giants!” and heckled the Mad Dogs. When I ended the third inning by catching a fly ball, a voice behind me barked, “You better drop the next one!” I turned and saw a hulking dude with a scowl on his face. I cracked a half-smile that he returned immediately.

The fans behind our dugout were solidly behind us; I asked one why he was rooting for us, and he grinned, “So I can talk shit at dinner tonight.” But the guys behind the backstop were just there to heckle, trash talking any and everyone who stepped to the plate. On my first at bat, I tried to block them out. It didn’t take, though, and I struck out. Talking to the inmates who weren’t on the field, I saw there was some jealously toward those that were. It was a privilege for the Giants to play ball, one that came from staying out of trouble and holding down a prison job. Taking the field a couple times a week kept them going, and some of the guys left on the sidelines were bitter. 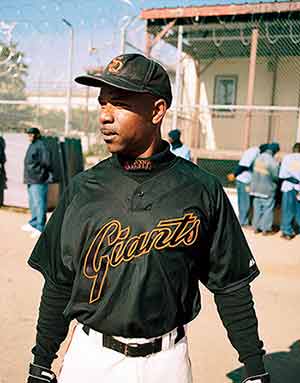 The Giants weren’t the most skilled players I had ever faced, but they were far and away the toughest—when their man on third made a run for home on a bunt, he broke his collarbone as he rammed into our catcher. After I hit a base-clearing triple in the fifth inning, it was a 4-1 game. After that, Rich lost his touch and we took control, putting across two more runs in the seventh. After hitting a double into the Aryan Brotherhood hangout in the seventh, I drew a walk in the eighth. That gave me a chance to talk to the Giants’ best player, the first baseman, who had accounted for half of his team’s hits. He told me he was due to be paroled in just three weeks, but he had put in a request to stay until after the baseball season ended.

Trailing 6-to-1 going into the bottom of the ninth, the Giants needed a spark to get things going. A series of hits drove in two runs and with only one out and runners on base, our slim 6-3 lead started to look tenuous. With the help of a blown call by the home-plate umpire on a check-swing third strike, the Giants had runners on second and third with only one out. After a strikeout and a ground out up the middle, the Mad Dogs came away with the victory. We trotted in from the outfield to shake hands, and it was all love between the opposing teams. The Giants seemed glad for the sunny day and some good competition, and despite the loss, they were in good spirits.

A week later, I drove by the prison in a car packed with friends on the way to the beach. The thought flashed through my head that the guys I’d played against were still in there, doing exactly what they were doing a week ago, and that if I drove by 20 years from now, many would still be there, doing the same things. As I talked to the inmates on the team, there was an air of resignation, of giving in to the mundane and serving their time. Instead of living their days, they were just maintaining and trying to survive. But for two hours every Saturday during baseball season, they’ve got something to look forward to.