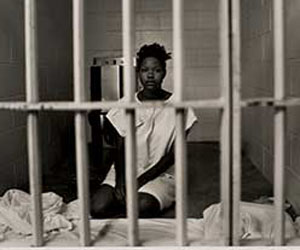 
The number first appeared in headlines earlier this year: Nearly one in four of all prisoners worldwide is incarcerated in America. It was just the latest such statistic. Today, one in nine African American men between the ages of 20 and 34 is locked up. In 1970, our prisons held fewer than 200,000 people; now that number exceeds 1.5 million, and when you add in local jails, it’s 2.3 million—1 in 100 American adults. Since the 1980s, we’ve sat by as the numbers inched higher and our prison system ballooned, swallowing up an ever-larger portion of the citizenry. But do statistics like these, no matter how disturbing, really mean anything anymore? What does it take to get us to sit up and notice?

Apparently, it takes a looming financial crisis. For there is another round of bad news, the logical extension of the first: The more money a state spends on building and running prisons, the less there is for everything else, from roads and bridges to health care and public schools. At the pace our inmate population has been expanding, America’s prison system is becoming, quite simply, too expensive to sustain. That is why Kansas, Texas, and at least 11 other states have been trying out new strategies to curb the cost—reevaluating their parole policies, for instance, so that not every parolee who runs afoul of an administrative rule is shipped straight back to prison. And yet our infatuation with incarceration continues.

There have been numerous academic studies and policy reports and journalistic accounts analyzing our prison boom, but this phenomenon cannot be fully measured in numbers. That much became apparent to me when, beginning in 2000, I spent nearly four years shadowing a woman who’d just been released from prison. She’d been locked up for 16 years for a first-time drug crime, and her absence had all but destroyed her family. Her mother had taken in her four young children after her arrest, only to die prematurely of kidney failure. One daughter was deeply depressed, the other was seething with rage, and her youngest son had followed her lead, diving into the neighborhood drug culture and then winding up in prison himself.

The criminal justice system had punished not only her but her entire family. How do you measure the years of wasted hours—riding on a bus to a faraway prison, lining up to be scanned and searched and questioned, sitting in a bleak visiting room waiting for a loved one to walk in? How do you account for all the dollars spent on collect calls from prison—calls that can cost at least three times as much as on the outside because the prison system is taking a cut? How do you begin to calculate the lessons absorbed by children about deprivation and punishment and vengeance? How do you end the legacy of incarceration? 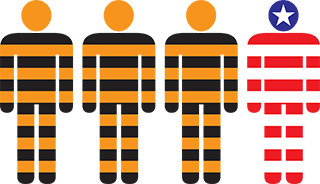 The US holds 1 in 4
of the world’s prisoners.

This is not to say that nobody deserves to go to prison or that we should release everyone who is now locked up. There are many people behind bars who you would not want as your neighbor, but in our hunger for justice we have lost perspective. We treat 10-year sentences like they’re nothing, like that’s a soft penalty, when in much of the rest of the world a decade behind bars would be considered extraordinarily severe. This is what separates us from other industrialized countries: It’s not just that we send so many people to prison, but that we keep them there for so long and send them back so often. Eight years ago, we surpassed Russia to claim the dubious distinction of having the world’s highest rate of incarceration; today we’re still No. 1.

If awards were granted to the country with the most surreal punishments, we would certainly win more than our share. Thirty-six straight years in solitary confinement (the fate of two men convicted in connection with the murder of a guard in Louisiana’s Angola prison). A 55-year sentence for a small-time pot dealer who carried a gun during his sales (handed down by a federal court in Utah in 2004). Life sentences for 13-year-olds. (In 2005, Human Rights Watch counted more than 2,000 American inmates serving life without parole for crimes committed as juveniles. The entire rest of the world has only locked up 12 kids without hope of release.) Female prisoners forced to wear shackles while giving birth. (Amnesty International found 48 states that permitted this practice as of 2006.) A ban on former prisoners working as barbers (on the books in New York state). 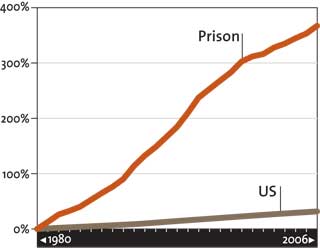 ARRESTS AND INCARCERATION
(rate per 100,000 people) 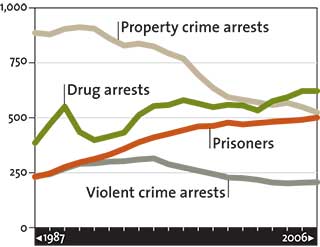 America is expert at turning citizens into convicts, but we’ve forgotten how to transform convicts back into citizens. In 1994, Congress eliminated Pell grants for prisoners, a move that effectively abolished virtually all of the 350 prison college programs across the country. That might not seem like a catastrophe, until you consider that education has been proven to help reduce recidivism. (This was the conclusion of a recent paper by the Urban Institute, which reviewed 49 separate studies.) As the New York Times‘ Adam Liptak has pointed out, our prisons used to be models of redemption; de Tocqueville praised them in Democracy in America. Many prisons still call themselves “correctional facilities,” but the term has become a misnomer. Most abandoned any pretense of rehabilitation long ago. Former California governor Jerry Brown even went so far as to rewrite the state’s penal code to stress that the primary mission of that state’s prisons is punishment.

Our cell blocks are packed with men and women who cannot read or write, who never graduated from high school—75 percent of state inmates—who will be hard-pressed to find a job once they are released. Once freed, they become second-class citizens. Depending on the state, they may be denied public housing, student loans, a driver’s license, welfare benefits, and a wide range of jobs. Perhaps there is no more damning statistic than the fact that within three years, half will be convicted of a new crime.

Recently, there have been some hopeful signs. In April, the Second Chance Act was finally signed into law; it will provide federal grants to programs that help prisoners reenter society. But our punishment industry—which each year spends millions lobbying federal and state lawmakers—has grown so massive and so entrenched that it will take far more than one piece of legislation to begin to undo its far-reaching effects.

Just look at our felony disenfranchisement laws, which prohibit 5.3 million people from voting—including 13 percent of African American men. These numbers actually underestimate the scope of the problem, as many ex-prisoners believe they cannot vote even if they can. And so the legacy of our prison boom continues: We’ve become a two-tier society in which millions of ostensibly free people are prohibited from enjoying the rights and privileges accorded to everyone else—and we continue to be defined by our desire for punishment and revenge, rather than by our belief in the power of redemption.