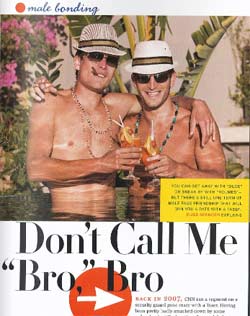 Debra seems to be taking a lot of guff from commenters over her piece on the possibly-ironic use of “holler” in an e-mail from a random publishing house, but I have to say I’m 100 percent behind her.

Seriously, who says “holler” unless they’re singing along with Missy Elliott’s “Get Ur Freak On?” Even then you’d better be pretty drunk.

Esquire GQ (like I can tell those magazines apart) recently tried to pin down the best terms guys can call other guys, and since the ironic use of out-of-date buddy terms is a topic I consider myself a bit of a connoisseur of, cap’n, I found their shakedown fascinating. It focuses on the current overuse of the term “bro” amongst, well, those doofy white guys with baseball caps and Linkin Park CDs who wish they were your bro but are not your bro.

Apparently first noted in a 1968 edition of Current Slang, the word has come a long way from its original expression of black unity, and now GQ calls “bro” the “most grating, embarrassing word a guy can use”:

Other words say the same thing as bro but don’t stimulate the same level of derision. The king of slang pronouns, of course, is dude, which now competes with the F-word for its sheer number of meanings and uses. … You can get away with man, but steer clear of my man. Careful with pal and partner, you could sound like you walked off the set of Mayberry RFD. The word guy sounds precious. Buddy can be smarmy. You still hear lots of suburban white guys coopting gangsta speak like dawg, nigga, and homey, and they always come off moronic doing so. Brah is lame when used by anyone but a real Hawaiian. Holmes? For some reason, white guys can use it but black guys can’t. Do not even think about home slice. One of the best things a guy can call another guy, I think, is bitch. ‘Sup, bitch? It’s cool. … If you coach high school football, go ahead and use chief. Otherwise, no.

Wow, that’s complicated. Who can and can’t say “holmes” and “man” again? Well, I say forget all those and use the phrase I’m trying to bring back: “hot shot.” As in, “hey, hot shot, nice Riff post!” If we can just get Riff readers to start using it in their daily conversations, we can eliminate “bro” for good. Holler?