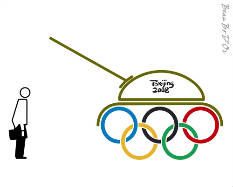 The hype machine is now in high gear. You would have to live on the moon not to know: The Olympics are almost here. Prepare yourself to see world leaders dancing in the aisles at the opening ceremony—those who will be there, anyway (Am I the only one who remembers Al Gore’s hypnotic gyrations in Sydney?); to listen to countless hours of platitudes about world peace; to see hours of melodramatic footage documenting the life challenges faced by individual athletes; and, of course, to enjoy some world-class sport. Also in the mix, as seems unavoidable, will be mini-documentaries about China’s place in the world, the advances it’s made, where it’s going, etc. We’ll see images of picturesque rural landscapes and cities the size of Chicago that none of us have ever heard of.

I must admit, part of me looks forward to all of this, the spectacle even more than the sports. But lost in the pageantry will be the reality that the Olympics—not just those to be held in Beijing next month, but the entire Olympic system—is not always the rosy celebration of international peace and cooperation it purports to be. A piece by Olympic scholar John Hoberman in the current issue of Foreign Policy argues that the Games “often mask human rights abuses, do little to spur political development, and lend legitimacy to unsavory governments.” The article itself is available only to the magazine’s subscribers, but the following press release outlines Hoberman’s attempts to debunk some prevailing myths about the Olympics:

Yes, they are. Politics have always been part of the games. The 1968 Olympics in Mexico City were awarded to a one-party, authoritarian government. The Soviet Union won the 1980 games by threatening to leave the Olympic “family.” And there is no more notorious example than the 1936 Berlin Games, which Adolf Hitler used to enhance his authority. “Whether welcome or not, politics is a part of the games,” writes Hoberman. “The problem is, the [International Olympic Committee] seems not to have a clue as to what to do about it.”

False. As Chinese troops stormed into Tibet this spring, the IOC opted to condemn “violence from whatever side.” That it would have preferred to be spared this attention was wisely left unsaid. Nor has the IOC been willing to demand better behavior from China’s rulers. In truth, “Olympic diplomacy” has always been rooted in doublespeak that yields few, if any, results.

The Olympics Are a Catalyst for Change

Prove it. Pre-Olympic repression is a tradition whenever the games are entrusted to authoritarian regimes. Just ask the departed Jews and persecuted anti-Nazis of 1936 Berlin. In the same way, 1 million Chinese migrant workers—without whom the construction of the Beijing Olympic facilities would have been impossible—are being carted out of Beijing.

The Beijing Games Are the Most Controversial Ever

They may be. The 1936 Berlin Games and the U.S.-boycotted 1980 Moscow Games were both protested on political grounds. Likewise, protests against the Beijing Games have targeted Chinese brutality in Tibet, energy deals with Sudan and Burma, and repressive measures. But the sheer clout of China within the geopolitical system separates it from earlier Olympic controversies. “The Nazi regime of 1936 had nothing comparable to China’s global reach today, and the Soviet economy in 1980 was a dead man walking,” writes Hoberman. “The most heated controversies surrounding Beijing probably have yet to unfold.”

Photo used under a Creative Commons license from sha3bi1Beijing.