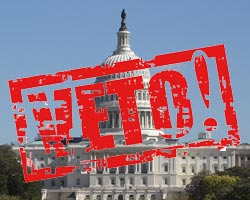 On Wednesday, the House passed the Intelligence Authorization Act For Fiscal Year 2009 (H.R.5959), which, once reconciled with its Senate counterpart, will travel up Pennsylvania Avenue for the president’s signature. It’s unlikely to get it, though, for the bill has become the latest flash point in the White House’s ongoing battle to expand executive power.

The bill contains provisions calling for prohibiting detainees from being interrogated by contractors (like at Abu Ghraib); the establishment of an inspector general of intelligence; regular reports to Congress on the nuclear weapons programs of Iran, Syria, and North Korea; and a regular National Intelligence Estimate on Syria’s WMD programs. More controversial, though, and more troubling to the White House, it mandates that the president provide members of the House intelligence oversight committee with expanded access to secret information about intelligence activities (such as classified legal opinions, risk assessments, and cost estimates), and requires that the intelligence community brief the committee on all covert actions that were in effect as of April 24, 2008. The bill details a punishment for White House non-compliance: 75 percent of the budget for covert actions will be withheld.

The White House is not pleased by this, and released a document (.pdf) on Wednesday morning making clear its objections. The threat to limit funding for covert operations until congressmen are briefed, the document says, “is inconsistent with the statute that expressly authorizes limited notice to Congress in exceptional cases and would undermine the fundamental compact between the Congress and the President on reporting highly sensitive intelligence matters—an arrangement that for decades has balanced congressional oversight responsibility with the need to protect intelligence information.” As for the demand to up the flow of classified information to congressional oversight committees, the White House says it “goes beyond any legitimate oversight function” and simply encourages “micromanagement of [Intelligence Community] activities.” If the bill makes it to the president’s desk with any of these provisions attached, “senior advisors would recommend that he veto the bill.”

This is not the first time that an intelligence authorization bill has run smack into White House instransigence. It’s now been three years since Congress and the White House have been able to reach an accommodation. Why? “This administration wants maximum authority and maximum discretion,” says Steve Aftergood, director of the Project on Government Secrecy at the Federation of American Scientists, who blogs at Secrecy News. “It lashes out at any semblance of checks and balances.” Even if Congress presents few obstacles to the White House having its way. “Up until now, oversight has been pretty crappy!” says Aftergood. “I think that’s the problem… Information sharing is indispensable to the oversight process. If we want congressional oversight, the committees need access to this basic information.”

Meantime, if Congress, as is expected, yields to pressure from the the White House, as it has done the last three years, the intelligence community need not worry about its budget for undercover operations. As has become routine, the funding provisions (minus the new proposals) will be attached to an unrelated bill and signed into law. And, once again, the Bush-Cheney White House will have thwarted congressional oversight.