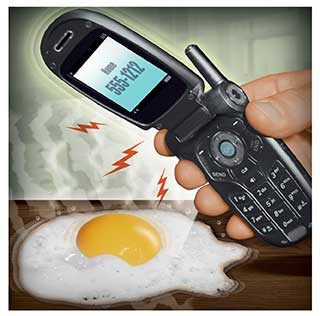 
twenty-eight years ago, Arthur Firstenberg had a dental X-ray. He’s been on the run ever since.

That X-ray, he says, made him excruciatingly sensitive to electromagnetic fields—the low-level radiation that emanates from power lines, microwaves, and, most vexingly, cell phones. Now 58, Firstenberg has spent more than a decade crisscrossing the country, trying to find the last unwireless spot in America. When cell phone towers came to New York City, he moved upstate. Then he headed to Mendocino, California. These days, he lives out of his ’87 Nissan station wagon in Santa Fe; a house is too risky. “Your neighbor could get wifi, and then you have to leave and hunt for a new home.”

At first, I was inclined to chalk Firstenberg’s symptoms up to plain old paranoia. After all, the World Health Organization’s website says “no study [on cell phone radiation] has shown adverse health effects at exposure levels below international guideline limits.” But doctors and scientists are starting to scrutinize how invisible electromagnetic fields affect human health, especially when it comes to cell phones, one of the most ubiquitous sources of microwave radiation. In 2006, a Swedish study reported that 85 of 905 brain tumor patients had used mobile phones heavily for 10 years or more, and most of their tumors occurred on the side of their head where they usually held their phones. In March, after reviewing more than 100 studies on the link between cell phone use and brain cancer, a prominent Australian neurosurgeon concluded that cell phones could have a broader public health impact than smoking. The list of conditions that researchers have associated with electromagnetic radiation includes trouble focusing, fatigue, headaches, sleep disturbances, and Alzheimer’s. (And don’t forget asthma, diabetes, cataracts, and honeybee colony collapse disorder, insists Firstenberg.)

So far, no one has been able to explain exactly how these seemingly benign waves could lead to cancer, much less this laundry list of medical woes, and for that reason, few scientists are willing to say for sure that cell phone use will make you sick—or that it won’t. The heating effect of electromagnetic waves is well understood; it has been proved that they can burn human tissue if they’re intense enough. (Think microwave oven.) Standards set by the Federal Communications Commission ensure that cell phone emissions stay well below that heating threshold.

But Joachim Schüz, head of the department of biostatistics and epidemiology at the Danish Cancer Society, suspects that heat isn’t the only way radiation causes health problems. So far, no one has been able to prove definitively that its “nonthermal” properties have any detrimental effect on living tissue. “You find one cell reacting, one not,” he says. “So you can’t really say it’s due to the radio waves.”

Why is it easier to watch Netflix movies on a PC than a Mac?

so you’re about to use Netflix’s “instant watching” feature on your MacBook, when suddenly an error message pops up: “Sorry, blame Steve Jobs.” Huh? Wasn’t the whole point of getting a Mac to escape Microsoft’s monopolistic tentacles and have the freedom to do stuff like stream movies? The problem is that Apple won’t license its copyright-protection software to third parties like Netflix. Predictably, Apple wouldn’t emerge from behind its titanium curtain to answer our questions about why it won’t let consumers use whatever video service they choose. John Sullivan of the Free Software Foundation suspects that Apple wants you to buy movies only from iTunes. That may keep Steve Jobs in black turtlenecks, but it ticks off dedicated Mac users, many of whom have no doubt noticed that Netflix movies play perfectly fine on a stodgy PC. —Leigh Ferrara

Have a problem? Oh yes, you do. Go to motherjones.com/consumer-retorts to vent about annoying products and corporate policies. Selected entries will get MoJo swag.

Since 1999, Schüz has been a principal investigator for the Interphone project, which has produced the largest body of epidemiological work on cell phones and cancer to date. The official results aren’t ready yet, but 8 of the 13 countries involved have already released their initial data. Several of these early studies show a strong correlation between long-term cell phone use and brain tumors, both malignant and benign.

Schüz cautions that the individual studies by themselves are too small to overcome some significant problems with the data. Finding subjects who have brain tumors and who have used their cell phones for more than 10 years is difficult, especially considering that the tumors typically take 10 to 20 years to develop. What’s more, people are notoriously bad at remembering how much they’ve used their phones and which ear they hold their cell phone up to—especially if they’re looking around for something to blame a brain tumor on.

Ben Greenebaum, a retired physics professor and former president of the Bioelectromagnetics Society, an international group of radiation scientists and wireless-industry professionals, says that despite Interphone’s preliminary findings, “I’m not prepared to shut anything down on the basis of what I see now.” But, he admits, “I do think you have to be cautious and use these things when they make sense.” He recommends using a headset whenever possible and warns that “if you carry it on your belt, you’ll get a higher field into your stomach,” even when the device is turned off. “So set it on the counter.” Don’t try to make calls where your reception is poor—phones emit more radiation when they’re searching for a signal. The German and French governments have recommended that parents limit children’s cell phone use, since less is known about the effect of radiation on developing brains.

Of course, if you’re really worried, you could ditch your cell phone for a quaint landline. Just don’t expect the rest of the world to follow suit. Firstenberg has found that it’s almost impossible to avoid the mobile-wielding masses. He used to ask strangers—politely—to stop talking on their phones in his presence until he got reprimanded in a grocery store for harassing a customer. “People get offended,” he says. “They just don’t know about microwave radiation.”

For the time being, the fcc is not considering any changes to its standards for cell phone radiation. Yet some cell phone companies have started including a pamphlet about potential health risks with their packaging, perhaps to guard against future litigation. And Schüz hasn’t ruled out the possibility that as more data roll in, the scientific consensus could shift dramatically. “If you ask me a year from now,” he says, “I might have changed my mind.”