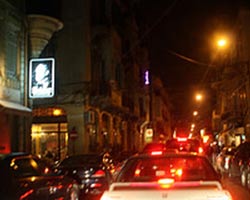 It’s 3 a.m., and I have just left the tiny, noisy bar of Torino for a place around the corner called Biba, in the trendy Beirut neighborhood of Gemayze. I’m on my last leg, but for Beirut’s pub crawlers, the night has just begun. The bars here begin to fill at 11, and many simply stay open until the last person leaves—often, at daylight.

Many of the bar-hopping 20- and 30-somethings I’m out with grew up with war, and to them, the peace of the past few months is precious indeed. The expectations of future wars loom in the shadows of every alley, waiting to mug tonight’s fragile calm.

At Biba, the party gets wilder. People are screaming, dancing sloppily, standing on the bar. The bartender stands before his rows of backlit bottles and pretends to tell the clientele to quiet down. No one pays any attention.

I am sitting next to Labib, a Syrian friend with the means to visit Beirut just about whenever he likes. He is wearing a stylish white polo shirt with the collar turned up, plaid madras shorts, and flip-flops—the outfit of an American frat boy.

“What are they talking about?” I ask him. “Why are people screaming?”

“Nothing,” he says. “Everyone expects tomorrow to be worse, so they party like it won’t come. Definitely, it takes its toll on your body, but it is a kind of coping mechanism.”

Labib tells me about a friend who bought a new BMW during the civil war, which ended in 1990. The next day it was destroyed by a rocket. Since then, the same friend has walked across mines that didn’t go off.

“Can you imagine what that does to your psychology?” he says.

I can’t really, but there are moments when intuitively, the manic partying makes sense.

Like when people mention something about the war, and everyone says, “Which war?” And they keep on talking, without missing a beat.

Or when my roommate says the May fighting this year—when Hezbollah took over a large part of the city—was no big deal. Oh, but her friend’s bedroom was blown up by an RPG.

Next to hope, everywhere, are the remains of unspeakable violence. Buildings in Beirut are either brand new, or old, stained concrete, often pockmarked from bullets. There’s very little in between. Every night, fireworks resound in the city and in the hills above it, as fiestas rage. At each thud, people in their homes exchange nervous smiles until they can look out the window and see the colorful evidence of the explosions’ peaceful purpose. Then, their faces relax, and they pretend they were never worried.

The thuds are not always fireworks. On Wednesday, a bomb in the northern Lebanese city of Tripoli killed at least 14 people on a bus—9 soldiers and 5 civilians. It was the latest and most atrocious loss of life during a rough summer in Tripoli: Clashes between Sunni and Alawite districts in the city claimed an additional 23 lives in June and July.

Such spates of bloodshed serve as mile-markers in Lebanon that can be traced back for years. The countrywide clashes in May claimed more than 60 lives. In the summer of 2007, the Lebanese army suppressed an uprising by the shadowy extremist group Fatah al-Islam, which had made its base in the Palestinian camp of Nahr el-Bared. The fighting—including the shelling of the camp —killed nearly 500 people. In 2006, Israel bombarded Lebanon for 33 days in response to Hezbollah’s capture of two Israeli soldiers, killing nearly 1,200 Lebanese, destroying infrastructure, and leaving the south of the country littered with cluster bombs. And in every year since the assassination of former Prime Minister Rafik Hariri in 2005, there have been sporadic car bomb assassinations of politicians and journalists from a variety of backgrounds.

Underlying it all is the memory of the catastrophic civil war, which pitted everyone against everyone from 1975 to 1990. The warlords of that time are today’s politicians; strife was the childhood backdrop for many of the young, hard-partying Lebanese.

Not all of these events are directly related, but together they form a bloody tapestry, a landscape rife with possibilities for instability, and a sense that, if there is peace in Lebanon, it is not because there is security but simply because people have not chosen to fight.

It is this kind of a fragile peace that has alighted on Beirut for the past two months. A new government was formed and a president, Michel Sleiman, was elected after six months without one, ending the May standoff. In July, people celebrated the return of five Lebanese from Israeli prisons, when Hezbollah—who are national heroes for a good portion of the country—successfully negotiated their return in exchange for the corpses of the two Israeli soldiers the group captured in 2006. Now, Sleiman is making diplomatic overtures to Lebanon’s estranged neighbor, Syria.

No one knows what tomorrow will bring. Until then, they hope the night never ends.