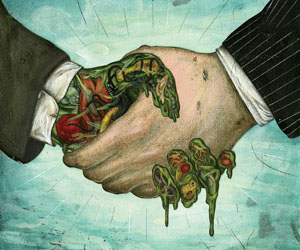 For a while last year, it seemed the reports of tainted food, drugs, and toys flowing in from China would never cease. First came the pet food scare, in which a toxic additive killed thousands of animals. Summer brought vast recalls of lead-tainted Thomas trains and other name-brand toys, counterfeit Colgate containing antifreeze, salmonella-infected toddler snacks, and ddt-contaminated seafood. In the fall and winter, dozens of patients died after receiving bad batches of heparin, a blood-thinning drug produced in China by US firms.

At the height of it all, President Bush offered lip service. “The American people expect their government to work tirelessly to make sure consumer products are safe. And that is precisely what my administration is doing,” he declared that July. He then issued an executive order directing Health and Human Services Secretary Mike Leavitt to seek solutions. Two months later, Leavitt promised that US agencies would pinpoint the riskiest imports and step up enforcement. And then nothing happened.

William Hubbard, a senior Food and Drug Administration official who retired in 2005 after serving under seven presidents, had seen it all before. In response to the 9/11 attacks, staffers at the fda—which oversees some 80 percent of food imports (the usda handles the rest)—had developed an Import Strategic Plan that revealed perilously weak controls on food imports. Unveiled in 2003, it was intended to boost inspections of risky cargo and slap greater penalties on importers of dangerous goods. It would have cost a paltry $80 million, but the administration had already made its wishes clear: No new programs. As Hubbard recalls, then-deputy fda commissioner Lester Crawford “told us there’s no money for this, and the White House wants to cut it.”

Hubbard realized this spelled trouble. Chinese food exports to the United States have nearly quintupled in the past decade, from roughly $880 million to more than $4.2 billion, and the People’s Republic, after Canada, has become America’s second-largest seafood supplier. China’s pharmaceutical exports to the US have more than quadrupled in the past five years, and some 3,000 Chinese firms now sell medical devices in the States. Such is China’s reach that American consumers would be hard pressed to find certain items, including vitamin C tablets or heparin, manufactured anywhere else.

Yet the Bush administration, in its eagerness to expand trade, has relegated consumer safety to the backseat. fda warning letters to companies fell off dramatically, Hubbard says, after the agency’s general counsel, a Bush appointee, decided such letters should only be sent in cases where the fda intended to sue the firm. According to the Government Accountability Office, inspections of overseas food factories declined by more than half from 2001 to 2007, and fda inspectors routinely gave foreign drugmakers a heads-up in advance of their visits, a courtesy not extended to American firms.

In some cases, oversight has even been outsourced to China. In June 2007, responding to an epidemic of Chinese seafood containing carcinogenic chemicals and banned antibiotics, the fda announced that certain products would be held until cleared by lab tests, but allowed Chinese labs—notoriously unreliable—to do the testing. Six weeks later, the Associated Press reported that at least a million pounds of the targeted seafood had hit American plates and stores untested, despite the agency’s directive.

Don’t blame the inspectors. The administration waited until June 2008—after legislators from both parties had given the fda commissioner a sound public flogging—to seek more funding for food safety. As of this spring there were only about 300 inspectors, Hubbard says, to spot-check more than 13 million annual shipments. Only a fraction—7 percent of incoming drugs, for instance—got even a cursory glance. “We’ve known for years this is a huge problem,” he says.

Indeed, fda documents scrutinized by Mother Jones show that officials have long known dangerous products were entering the country. They knew it because some portion of the tainted, counterfeit, or mislabeled shipments were being intercepted and tallied in monthly lists that get passed around the agency. While the same products appear on the lists month after month, agency officials seldom warn the public until after Americans are hurt or killed.

For example, starting in February 2006, fda inspectors routinely caught shipments of eels and other Chinese seafood tainted by pesticides, illegal drugs, bacterial infections, and malachite green, a carcinogenic dye. But agency officials didn’t sound a significant public alert until 16 months later, in June 2007. That same month, the fda announced a recall of Veggie Booty, a toddler staple, because its Chinese-made seasonings contained salmonella, but the warning came too late for 50 Americans, mostly young children, who were stricken with the bug.

Similarly, Chinese-made heparin might have killed far fewer Americans had the fda devised a better way to monitor deadly drug reactions. But because the reports trickled in months after the fact, the public wasn’t warned until a spike in “adverse events” had left 106 people dead; 71 had symptoms suggesting a bad reaction to what later proved to be a counterfeit ingredient.

China isn’t the only offender, of course, but the documents show it’s consistently the worst. This past May and June, for example, the fda rejected nearly three times as many food shipments from China as from Canada, even though Canada sent five times as much food into the United States.

As the world’s top consumer of Chinese goods, the US has the clout to sway China’s behavior, but the administration has alternately ignored safety concerns and accepted assurances from the world’s fastest-growing exporter that it will clean up its act. China has placed almost no environmental or safety controls on exports; its food safety problems will cost $100 billion to fix, according to AT Kearney, a leading consultancy.

If anything, the Bush White House has put Americans at greater risk. Its safety agreements with China tend to be nonbinding, says Tony Corbo of the consumer group Food & Water Watch, and fail to hold Chinese goods to US standards. Food safety was barely mentioned at the US-China Strategic Economic Dialogue in May 2007, according to a federal official privy to the proceedings. (The subject was addressed belatedly at the next meeting, that December, following nine months of import nightmares.) “This administration is more interested in promoting trade,” the official noted.

Consistent with that agenda, the White House Office of Management and Budget, normally slow on regulatory matters, took all of one day to green-light US imports of Chinese-processed chicken in April 2006. “We are trying to open up our beef trade with China,” says Corbo. “The Chinese always say that they want the US to import Chinese poultry in exchange for US beef.”

The decision came despite unsettling findings by the usda team that had visited the Chinese poultry facilities two years earlier. At one plant, inspectors had found paint from the ceiling “on the table used for edible product,” while workers at another facility wiped down meat-handling areas with dirty cloths. Parts of a third factory, designated for sanitary operations, were contaminated with “grease, blood, fat, pieces of dry meat, and foreign particles.” President Bush nonetheless presented Chinese president Hu Jintao with the new poultry-import rule during a White House visit last year.

Explains a congressional staffer, “It was a goodwill gesture.”