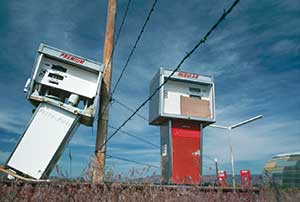 
Whenever economies sour, politicians blame speculators. But on occasion, they are right to do so. Speculators did wreak havoc in 1630s Holland, 1720s France, and in the American stock market in 1929. That crash led to the Great Depression and 60 years of tight controls on speculation. Now, thanks to our 30-year infatuation with free markets, the controls are off, and the mad gamblers are at it again. Yesterday’s burst bubble was housing; today’s expanding ones are energy and food. True, we have major long-term energy problems that cannot be laid at the feet of speculators. To avoid catastrophic global warming, we will be obliged to reengineer the country, from housing to transport to forests, and

also to develop and export the technologies required for the rest of the world to do likewise. Eight years of George W. Bush’s policies have made this much harder, and during that time the world may have passed “peak oil”—that moment when half the recoverable reserves of conventional oil have been drained and burned—so that from now on short supplies will be endemic. Meanwhile, demand grows, notably from China and India, which account for nearly 40 percent of the world’s population.

But do supply and demand explain oil prices at $140 per barrel, with voices from Goldman Sachs projecting $200 for next year (a figure that would push gas prices above $5 per gallon) and Russia’s Gazprom saying $250, despite a likely US recession? Do they explain the historic price hikes in rice, corn, and wheat, leading to hunger in the developing world? Do they explain the absolutely stratospheric price of copper? No they do not.

Yes, Virginia, speculators can affect the price—if they are large and relentless enough to dominate a market, and especially if they can store the commodity and keep it off the market as the price rises.

Futures markets exist to permit commercial interests to hedge their business risks. For a fee, a farmer (or oil producer) can put a floor under the price at which his product will sell. The forward price is normally a bit lower than the current price, but the contract protects the farmer from a catastrophic price slump—such as may occur in (for instance) bumper years. Speculators buy the futures on the chance that the market price will be substantially higher. They make a respectable profit on what is in effect an insurance function, and a killing in years of drought, flood, and war.

This system works reasonably well so long as speculators do not actually control or manipulate prices. For if they can drive prices way up, they can obviously cash in while the farmer (who has presold his crop) cannot. Strict regulation by the Commodity Futures Trading Commission (cftc) is supposed to prevent that.

But thanks to Phil “nation of whiners” Gramm—the former Texas senator who was until recently John McCain’s top economic adviser (see “Foreclosure Phil“)—futures market regulation went to hell. Under the “Enron loophole” pushed through by Gramm in 2000, energy futures were allowed to escape all federal and state regulation. Gramm embedded that loophole in a surprise 262-page rider, drafted at the behest of Wall Street and Enron, in an 11,000-page appropriations bill on a Friday evening two days after the Supreme Court handed down its Bush v. Gore ruling and as Congress was rushing home for Christmas. In a separate bit of absurdity, in January 2006, the Intercontinental Exchange (ice) of Atlanta, which trades benchmark US oil futures (West Texas Intermediate or wti), came to be treated by the cftc as a British market (the “London loophole”) so that US regulators do not even track what is going on. (Even more surreal, the cftc was going to allow trades of US oil futures on terminals located in America to be “regulated” in Dubai; political pressure put an end to that idea in July.)

Worse still, Gramm’s Commodity Futures Modernization Act of 2000 also opened the way for growth in deregulated “credit default swaps”—a way in which financial institutions “insured” that bad loans would not cause them losses. This, combined with other deregulatory moves by the cftc, broadened the “swaps loophole,” an enormous backdoor into the commodities markets, basically permitting speculators making bets off the commodities exchanges to be treated as “commercial interests”—like say, farmers—and hence avoid the scrutiny (including limits on the size of their bets) normally applied to financial players. Thus today, when officials like Treasury Secretary Henry Paulson say that speculation is not a factor in the commodity markets, they’re not counting hedge funds and investment banks as speculators—even though that’s what they really are.

According to Senate testimony on June 3 by Michael Greenberger, who used to head the cftc‘s division of trading and markets, if swaps were properly labeled, about 70 percent of the oil futures now traded on the New York exchanges would be deemed speculative, not commercial, and subjected to a high degree of regulatory scrutiny.

Okay, let’s think this through. First, vast sums of money are flowing through regulatory loopholes into the commodities markets, particularly for oil. Second, spot prices (those charged for immediate sale) in all commodity markets have been soaring. In particular, Americans now pay an average of $4 per gallon for gas. Is it possible that these two events are unconnected? Is it possible that Paulson—former ceo of Goldman Sachs—is right when he says that the price of oil is being driven mainly by supply and demand?

No, and Senate testimony in May by Michael W. Masters, a hedge fund manager, illustrates why not. Masters points to the spectacular rise of “index speculation,” in which pension funds and other investors invest in the commodities futures markets according to formulas created by, among others, (guess who?) Goldman Sachs. Index speculation investments have risen from $13 billion to more than $250 billion since 2003. Masters calculates that the speculative demand for Texas oil futures from this source is now five times the actual 2003 stockpile (the baseline he used); for corn and aluminum the figure is about nine times; for silver it’s a phenomenal fourteen times. There is of course no way that the orders represented by all those futures contracts could be met.

So the futures price goes up. As it does, supplies actually disappear. For instance, copper expert Frank Veneroso believes that 800,000 tons of copper has been hidden away in China, waiting to emerge closer to the market top. For Saudi Arabia and perhaps Russia the matter is simpler: Oil stays in the ground, and the oil not sold boosts the price of the oil that is. As current prices soar, the index speculators obey their computer programs, which tell them to pour still more money into the commodity markets.

There may be a further element at play, according to an April speech by Attorney General Michael Mukasey: “International organized criminals control significant positions in the global energy and strategic-materials markets. They are expanding their holdings in these sectors, which corrupts the normal functioning of these markets and may have a destabilizing effect on US geopolitical interests.” To whom exactly Mukasey is referring, he does not say. But that organized criminal interests have the motive, means, and opportunity—handed to them by Phil Gramm—to destabilize the world energy markets seems quite clear.

On these matters, there is a quick fix. Under pressure, the cftc is closing the London loophole. Early in the next administration, Congress must slam shut the Enron and swaps loopholes. Index speculation should be curtailed by making such strategies illegal for regulated pension funds and by imposing limits for all traders on how much they can buy or sell. Investment banks using credit default swaps to enter the commodities markets should be regulated to the standards that apply to speculators, not as if they were heating-oil vendors hedging against a warm winter. Investigations now under way at the Federal Trade Commission, the Federal Energy Regulatory Commission, and the Department of Justice should be intensified, and criminal manipulation of the markets, if detected, should be punished.

Finally, the federal government should burn the oil speculators by selling up to 4 million barrels a day from the Strategic Petroleum Reserve. And as economist Tom Palley has pointed out, consumers can help too. An awful lot of gas is stored in cars. If people stop topping off and make do with half a tank, they’ll back up supply and lower demand. It’s a brilliant suggestion and definitely worth a try.

And while this is being done, and especially if all this smoke leads to fire, someone should ask, “What did Henry Paulson know, and when did he know it?”