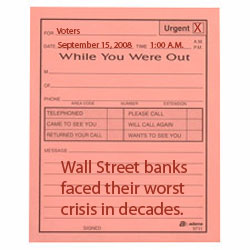 While you were sleeping, the landscape of the US financial system changed dramatically. CNBC is calling it, “The biggest shakeup in the history of the US financial system.” The country is in a “once-in-a century” financial crisis, former Federal Reserve chairman Alan Greenspan said on ABC’s “This Week” on Sunday. The New York Times reported late Sunday that Bank of America has reached a $44 billion deal to buy troubled investment firm Merrill Lynch. Another firm wasn’t so lucky: Unable to find a buyer over the weekend, 158-year-old investment bank Lehman Brothers filed for bankruptcy Monday morning. Lehman’s liquidation will mark the largest collapse of a Wall Street bank since Drexel Burnham Lambert folded in the wake of the junk bond scandal almost two decades ago.

The problems don’t end there. “We will see other major financial firms fail,” Greenspan said on “This Week.” Giant insurance company American International Group (A.I.G.) asked the Federal Reserve for $40 billion, “without which the company may have only days to survive,” according to the Times. Washington Mutual, too, may be in trouble, after its shares plummeted late last week and Moody’s Investor Service downgraded the bank’s debt to “junk” status. And in Europe, a Swiss newspaper reported that Swiss bank UBS will have to take another $5 billion in write-downs.

We’ll see what happens over the course of the day on Monday, but A.I.G., at least, seems to be in serious trouble. Adam Bakhtiar, a CNBC analyst, called Sunday’s events a “tidal wave of horrific news.” James K. Galbraith, an economist and contributing writer for Mother Jones, wrote in an email that while he has “a pretty good record on attacking Wall Street,” his “schadenfreude is very much under control at the moment”:

The world will not be a better place with two free-standing investment
banks—Goldman [Sachs] and Morgan [Stanley]—and a half-dozen major commercial banks, if that, running everything. Further, there is a risk that the unraveling will become disorderly and out of control from this point, as assets hit the market in fire sales and do not find takers. This will affect pension funds and greatly compound the collapse of the wealth position of the middle class…. The collapse of Wall Street will hit Main Street like Ike hit Houston.

So how do we get out of this crisis? Well, the prime mover of all of these problems is the collapse of the housing bubble in the United States. “There’s no question that this is in the process of outstripping anything I’ve seen, and it still is not resolved and it still has a way to go,” Greenspan said Sunday. “And indeed, it will continue to be a corrosive force until the price of homes in the United States stabilizes.”

The collapse of Lehman and the broadening crisis will undoubtedly be topic “A” for the presidential campaigns this week. Barack Obama and John McCain want to lead this country. How do they plan to respond to Monday morning’s news?